Skip to main content
18
Sep 2019
‘Fed up’ with homeless camps, L.A. County joins case to restore its right to clear them 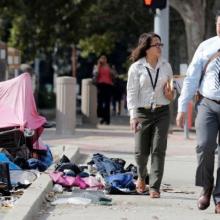 The Board of Supervisors has decided to throw its political weight behind an effort to overturn a court decision that has allowed homeless people to bed down overnight on sidewalks across California and the West.

On Tuesday, the supervisors voted to direct lawyers for Los Angeles County to draft an amicus brief, urging the U.S. Supreme Court to take up a challenge to Martin vs. City of Boise. The case, decided by the U.S. 9th Circuit Court of Appeals last September, found that arresting or otherwise punishing homeless people for sleeping on the sidewalk when there are not enough shelter beds or housing was unconstitutional.

Supervisor Kathryn Barger, who authored the county’s motion, said the ruling had “tied our hands” and made serving homeless people more difficult.

“We are grappling with a problem of unprecedented scale,” she said of the nearly 60,000 homeless people in Los Angeles County, many of them living outdoors. “Now, more than ever, it is critical that we have access to every tool at our disposal to combat homelessness.”

In July, attorneys Theodore B. Olson and Theane Evangelis, both with Gibson, Dunn & Crutcher, a powerhouse law firm with offices in L.A., announced that they planned to ask the U.S. Supreme Court to take up the case. In doing so, they cited the “urgent crisis and the public health challenge” of burgeoning homeless encampments in nine Western states.

“I became involved with this case because I cared deeply about the county’s ability to address the growing crisis,” Evangelis told the supervisors. “This crisis has reached the most urgent proportions. This is not a political issue. It is a humanitarian crisis.”

Tuesday’s meeting drew dozens of public speakers — most of them coming out against the county’s proposal. It was a discussion that grew heated at times. Hahn had to warn the audience, pleading for decorum. “This is not a free-for-all out there,” she said.

Those who argued against the county’s motion said the Boise ruling, as the case is commonly known, was necessary to prevent cities and counties from criminalizing homelessness.

“Arresting or citing someone who is out of options, to me, is not compassionate, and it’s not a common-sense solution,” Solis said.

Sahar Durali, an associate director of litigation and policy at Neighborhood Legal Services of Los Angeles, said she worried that overturning the federal court ruling would make it easier for local governments to arrest or ticket homeless residents, despite assurances from Barger and other county officials that their intention was to help.

“The idea that Martin will drain the county’s resources or prevent its progress is just not true,” Durali said. “This will give municipalities around the county free rein to throw people into containment camps, and we’ve seen how that’s going on the border.”

Several other people, including those speaking on behalf of the real estate industry, spoke in favor of the motion. Billie Greer, a South Park resident, praised the county’s effort to help homeless people with the hundreds of millions of tax dollars raised by Measure H.

“By taking the legal step before you, you will extend that leadership further for the benefit of the homeless,” she said. “I urge you to support this motion in support of the homeless and the public.”

Ridley-Thomas, who is co-chair of Gov. Gavin Newsom’s statewide task force on homelessness, stayed silent during the debate, heightening the suspense about how he would vote. Advocates knew he was the swing vote and pleaded for him to take their side.

But he ultimately chose to support the amicus brief.

“I’m simply fed up. The status quo is untenable,” he said in a statement. “We need to call this what it is — a state of emergency – and refuse to resign ourselves to a reality where people are allowed to live in places not fit for human habitation. I refuse to accept this as our new normal.”