A Los Angeles police officer sustained at least three gunshot wounds Thursday afternoon when a suspect opened fire on him during a pedestrian stop in South L.A., officials said. 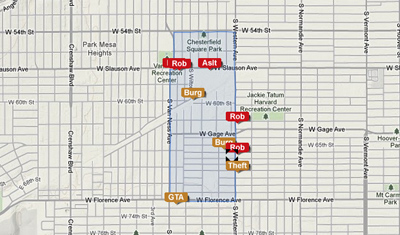 Shows approximate location of the attack in black and recent crime reports in brown and red. Crime L.A.

The attack occurred on Western Avenue when the officer pulled over several pedestrians and one cyclist. As soon as the officer and his partner got out of the car, one of the men opened fire.

Authorities say 12 to 15 shots were fired. Two shots hit the officer in the chest but were absorbed by his protective vest. Another shot hit his wrist and shattered his elbow.

Large swaths of the area were shut down during what LAPD Assistant Chief Earl Paysinger described as a "massive manhunt." One suspect was arrested but one or two others are at large.

The officer was rushed to a local hospital with what officials non-life-threatening injuries.

The shooting was reported at 2:45 p.m. near 66th Street and Western Avenue.

No other information was immediately available.