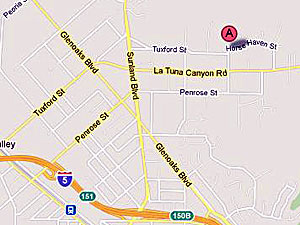 The veteran Foothill Division officers, identified as Fernando Sanchez and Alex Valencia, were driving in the 10000 block of West Tuxford Street about 3:30 p.m. when they were flagged down by a citizen who directed them to a parked motor home filled with smoke, police said.

After pulling over, the officers forced open the door and found a woman inside who refused to come out.

Wading through the thick smoke and past a burning mattress, the officers were able to grab the woman and remove her to safety.

The officers, who suffered minor smoke inhalation, were taken to Providence St. Joseph Medical Center in Burbank for treatment and are expected to fully recover.

The unidentified 45-year-old woman also was treated at a local hospital for smoke-related distress.