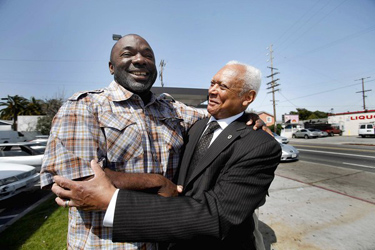 To think deeply and compassionately about South Los Angeles as we approach the 20th anniversary of the L.A. riots is to inhabit a middle ground between optimism and bleak defeat.

A lot of good is going on in the inner city. But the last two decades have also underscored how many problems remain, as stubborn and persistent as a strangling weed.

"It's been a schizophrenic journey, these 20 years," said John Mack, my tour guide to riot ground zero a few days ago.

South L.A., Mack said, "is a mix of success and failure. But you know what? We have to keep on."

Why should we listen to him? From 1969 until 2005, Mack led the Los Angeles Urban League, one of the nation's most prominent civil rights groups. It was a job that made him a pillar in the city's black community - a voice for those without one.

This was hardly an easy gig. He was a promoter of business and education and keeping families strong. He was also a firm LAPD critic, leery of the department's racially dubious past, long critical of Daryl Gates. Chief from 1978 until 1992, Gates was a man whose unenlightened views produce shivers, even today. For example, replying to a question about cop chokeholds, he said: "We may be finding in some blacks that when it is applied, the veins or arteries do not open up as fast as on normal people."

When Mack, now 75, retired from the Urban League, he found himself in an odd position for a man who'd been a thorn in the LAPD's side. He was appointed to the Police Commission - a watchdog role he still inhabits and one that gave him a clear view as the department struggled to break from a past shaped by Gates and his ilk.

"Had the LAPD had the relationship with the community 20 years ago that it has today, I'm sure there would have been outbursts, but I don't think we'd have anything like the terrible devastation we saw in 1992," said Mack, who sees the new LAPD as being the best in the nation.

He praised former Chief William Bratton and his successor, Charlie Beck, as all-important keys to the reform. "We've witnessed changes in that department that at one time I did not think were possible," Mack said.

Still, there's a lot more to the story of South L.A. all these years later.

We left our lunch spot - Harold and Belle's Creole on Jefferson Boulevard - and hopped inside Mack's Lincoln Town Car for a neighborhood tour. He let the memories spill out, starting with how on April 29, 1992, he huddled at the First African Methodist Episcopal Church, watching the verdict, feeling the awful emotion as the four LAPD officers were acquitted in the beating and arrest of Rodney King.

Then came reports of trouble. The intersection of Florence and Normandie avenues quickly erupted in violence as a frustrated community turned its anger inward and spread it outward. Mack remembers leaving the church and hitting the streets, trying desperately to calm things down amid burning businesses and the crackle of gunfire.

In the Crenshaw district we drove past the new light rail line, still being worked on but set to soon connect the neighborhood with downtown and the Westside. We saw new businesses on streets that had seen plenty of fire. Mack recounted walking through the area with President George H.W. Bush. The talk in those days was of partnership with the private sector. Massive corporate investments - billions of dollars' worth, some said - wouldn't merely revive South L.A. but would make it an urban jewel.

It didn't take but a few years for all the heady talk of reinvestment to sputter and fade.

When the commissioner drove to a building that once housed an automotive repair training center run by the Urban League and financed by Toyota, it became clear the private sector has its limits. The center operated for just over a decade and trained roughly 3,000 people, Mack said.

Then it closed. One of the reasons? Trouble finding enough applicants who could meet basic academic requirements - like reading at the eighth-grade level.

"Public education," Mack said, pursing his lips. "It's a disaster.... Our kids are going to either be provided with the right preparation for a new job market or they are going to be condemned to the second-rate, dependent on government for various types of services and their dignity in many ways destroyed."

As we kept going - past one of L.A.'s least-appreciated gems, the cozy business district in Leimert Park - I mentioned how, in some ways, many of these neighborhoods look and feel different than they did even 10 years ago. Back then, I'd roll to a stoplight and look around warily, on guard for gang-bangers or cowboy cops itching to pull me over for driving while black. Not anymore.

Mack agreed, noting more positives. The relationship between African and Korean Americans has gotten better. The Latino community keeps growing, forming the majority in most neighborhoods in South L.A., and while there's black and Latino tension, diversity is a strength.

A sprinkling of schools, youth groups and nonprofits are national models. Crime keeps plummeting. There's less graffiti and fewer kids milling around. Sidewalks, bus stops and many businesses seem to have a little more shine.

Finally, we arrived at Florence and Normandie. Mack walked toward the intersection and was approached by two tow-truck drivers, men who grew up in South L.A., living through the crack wars of the '80s and then the riots.

They shook Mack's hand and, without missing a beat, offered a street-level diagnosis of their community, speaking of hopelessness, frustration, isolation and few jobs; how young people had gone off to fight for their country, only to return to a world where the poor are poorer.

Both were worried that anger about the Trayvon Martin killing in Florida might spill over to their hometown.

Are some people simply giving up? Yes, they said.

"You know what, probably not," said Tray Ware, 48. "And I have to say, it starts with the LAPD. The LAPD has done a lot of things to bridge the gap with the community. Before you had fear and anger. Before, you had Gates, and now you have Beck. You can kind of trust these guys more. That changes everything."

Mack and I considered what we'd just heard, a pair of tow-truck drivers so sharply underscoring South L.A.'s truth. The good and the bad. Optimism and bleak defeat.

"We can't afford to stop," Mack said. He mentioned families, expectations and black-on-black crime. "We have to have systemic change, a long-term commitment on all fronts.... We have to be marathon runners."

Mr. Mack, my running shoes are on.