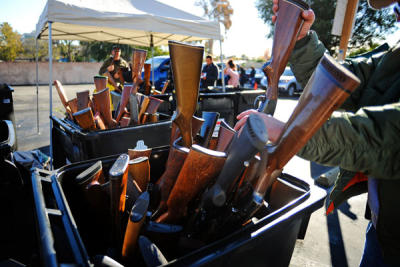 The gun buybacks, which were scheduled in the wake of the Newton, Conn., school shootings, allowed gun owners to turn in their weapons and receive $100 or $200 Ralphs gift certificates, with no questions asked. Police do check if the guns were stolen, and if so attempt to return them to their rightful owners. But otherwise they are destroyed.

The final results of the buybacks were announced Thursday as county and city officials held a press conference to warn revelers not to fire their weapons into the air on New Year's Eve. They also called for stronger gun-control laws throughout the nation.

"We want a place where elementary schools are havens of safety and learning, not death," said Los Angeles Police Department chief Charlie Beck. "This can only happen if we change the gun culture."

Lacey said anyone firing a gun into the air on New Year's Eve faces jail time and a fine up to $10,000 even if no one is hurt.