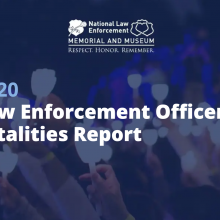 2020 was the deadliest year for law enforcement officers since 1974

A total of 264 officers died in the line of duty in 2020, according to new data released Monday by the National Law Enforcement Officers Memorial Fund (NLEOMF). That’s a 96% increase over 2019 – which saw 135 duty deaths – and makes 2020 the deadliest year for law enforcement since 1974.

According to the press release, the COVID-19 pandemic is responsible for the spike. The category for “other” causes of death, which includes COVID-19, was up 300% over 2019.

Firearms-related fatalities claimed the lives of 48 officers in 2020, a 6% decrease compared to the 51 officers killed in firearms-related incidents in 2019. Of the 48 officer deaths, 11 were investigating a suspicious person or activity, seven were killed responding to domestic disturbance calls, six deaths each were attempting an arrest and ambush attacks on officers, three were in tactical situations, and three others were responding to various disturbance calls. Four officers died responding to a robbery or burglary in-progress call while three were feloniously killed during traffic stops. Two officers were killed during the year serving warrants, two others were killed by inadvertent gunfire and one officer was killed by firearms responding to a mental health call.

Traffic-related fatalities increased 2% with 44 deaths in 2020 compared to 43 deaths in 2019. Of those, 18 were automobile crashes involving a collision with another vehicle, eight were single-vehicle crashes, 15 were struck while on the side of the road, and three involved a motorcycle crash.

The average age of the fallen officers was 47 years, with 17 years of service. On average, each officer left behind two children. Texas lost the most officers with 48, followed by New York with 19, according to the release.