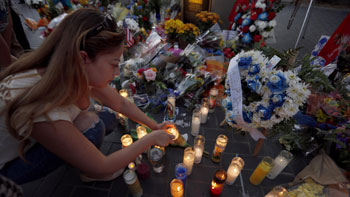 Laura Sarabia said she came to the Downey memorial for Officer Ricardo Galvez to pay her respects, and show her kids the hero he was. (Francine Orr / Los Angeles Times)

Abel Diaz, 16, of Bellflower, who had been previously charged with murder only, now faces the same charges filed against Alvarez and Knott, prosecutors said. Diaz was charged as an adult and remains jailed in lieu of $1-million bail.

The three had their arraignments delayed Monday and will be back in court Dec. 17 in connection with Galvez's death. They are being held without bail.

Alvarez and Knott could face the death penalty if convicted and if prosecutors decide to seek it. Because of Diaz's age, he faces up to life in prison if convicted.

Investigators said Galvez was sitting in his personal car in a parking lot next to police headquarters when two men walked up to his car and fired at him. Galvez, a five-year veteran of the Downey Police Department, was not wearing his uniform at the time, they said. The 29-year-old Marine reservist had served twice overseas.

The men fled in a Nissan sedan, authorities said, but an officer in the area heard the shots and gave chase. After the pursuit ended, the driver was caught in Montebello.

Hours later, Diaz and another man were taken into custody after an intense police search.

Investigators said the weapon, a revolver, was recovered.

They have admitted to investigators that they were trying to rob Galvez, said Los Angeles County Sheriff's Lt. John Corina.

Detectives believe that Diaz and Knott approached Galvez as he sat in his car while Alvarez acted as the getaway driver, he said.

Detectives were also investigating whether the three were involved in a recent string of robberies in Bellflower, Downey and Lakewood, he said.

Diaz's sister, Maricela Alvarado, told reporters Friday that her brother was innocent. She said Diaz told her that he didn't shoot Galvez but that his friend did.

On Monday, Downey police announced Galvez's rosary and viewing service will start at 5:30 p.m. Sunday at the Downey Civic Theatre. His funeral service will be held at 9 a.m. Nov. 30 at the Cathedral of Our Lady of the Angels in downtown Los Angeles. A graveside service will continue at Rose Hills Memorial Park in Whittier.