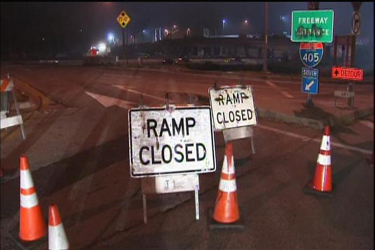 It isn't Carmageddon, but a four-night freeway closure on the 405 Freeway between Getty Center Drive and the 101 Freeway, starting Tuesday night, might cause some traffic headaches for drivers travelling from the San Fernando Valley to the Westside.

The closure is part of the massive I-405 Sepulveda Pass Improvement Project, which closed all lanes of the freeway over a weekend in July.

This week's six-mile closure, which starts on the southbound lanes of the 405 Freeway at 10 p.m. Tuesday, is a directional closure, which means only one direction will be closed at a time, according to Dave Sotero, a Metropolitan Transportation Authority spokesman.

"In Carmageddon, both sides were closed simultaneously," Sotero said. "The closure like the one tonight has become fairly routine."

Sepulveda Boulevard will be used as a detour route during the closure, according to Sotero.

"I've witnessed Sepulveda Boulevard late night with other closures in the past," Sotero said. "I'd estimate the detour will take drivers about 10 minutes to get through."

Closures on southbound I-405 will take place Tuesday and Wednesday night between 10 p.m. and 5 a.m., according to metro. Closures on the northbound lanes are scheduled to take place on Thursday and Friday between the same hours.

The 405-Sepulveda Pass Improvements Project will add a 10-mile HOV lane and improve supporting infrastructure such as ramps, bridges and sound walls on the San Diego Fwy, according to Metro's website.