Skip to main content
18
Jun 2014
About 50 members of violent L.A. street gang are arrested in sweep 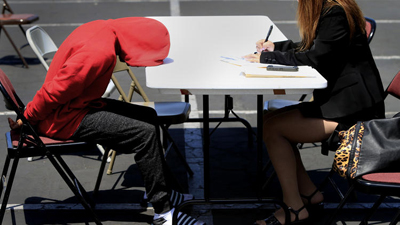 An alleged gang member from the "Gremlin Riderz" subset of the Five Deuce Broadway Gangster Crips is processed by a federal agent of the court after being arrested. (Mark Boster / Los Angeles Times)

Dozens of members of a notorious Los Angeles street gang were arrested early Tuesday as federal and local investigators moved to break up what they said was a violent and powerful cartel that ran a drug operation that stretched as far as Louisiana.

Members of the Five Deuce Broadway Gangster Crips have long imposed their will with acts of violence as they freely sold drugs near schools and playgrounds and even moved into skid row in downtown L.A. because of its potential as a drug market, authorities said.

Nearly all of the 50 people taken into custody were among 72 defendants named in a 213-page racketeering indictment accusing gang members of a multitude of crimes in South Los Angeles and far beyond. Eight defendants remain at large. The rest were already in custody.lRelated Indictment an in-depth look at South L.A. gang's alleged operations

The three-year investigation, dubbed Operation Gremlin Riderz, focused on a South L.A. gang that formed in the 1970s and claims to control the neighborhoods around the intersection of South Broadway and 52nd Street.

Federal, state and Los Angeles law enforcement investigators allege the gang is responsible for committing at least four killings since 1987 and decades of shootings, stabbings, armed robberies and violent confrontations with police.

Much of the gang's money flowed from selling drugs near skid row, where "there is a large and vulnerable customer base of drug addicts and mentally ill persons," but sales extended as far east as Louisiana and Minnesota, the indictment alleges.

The gang set up a network of scouts with cellphones to warn other gang members when police entered their territory, the indictment says. To hide its activities, the indictment alleges, the gang disciplined members for even talking to cops or getting their name on police reports they call "paperwork."

To cover for their activities, the gang uses "female associates to rent out residences, establish credit accounts, rent vehicles and transport controlled substances," because it's believed they draw less attention, according to the indictment.

Councilman Curren Price called the gang a "generational kind of enterprise" and said it has been affecting the community around it for years by preventing children from playing outside, instilling fear in parents and scaring away business.

"This gang has been a thorn in the side of not just this community, but this area for a long time," Price said.

All 72 defendants face mandatory minimum sentences of 10 years in federal prison if convicted, and many face potential life sentences.

Robert Clark, the assistant special agent in charge for the FBI, said the Broadway Crips is a medium-size gang, but that it had "imprisoned" the citizens of the neighborhood it operates in.

"Today was a process for returning power to the community," Clark said.