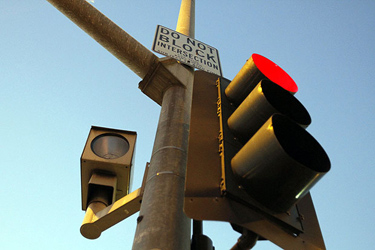 After a series of speakers Friday presented impassioned pleas to the Los Angeles City Council to either remove or keep the city's red-light camera program, the council agreed to put off discussing the issue until Tuesday.

The Los Angeles Police Commission voted unanimously earlier this month to end the program. Commissioners at the time balked at the idea that the cameras -- which are installed at 32 intersections -- cost more than the revenue they generate. They also indicated they were skeptical of data provided by the Los Angeles Police Department affirming the cameras' importance.

The commissioners' action put the city in the center of a national debate over the effectiveness of the cameras. Several major cities, including Anaheim, have banned them.

Advocates of the technology say the cameras pay for themselves, but an audit last year by City Controller Wendy Greuel found that claim was inaccurate.

Council members Tony Cardenas and Bernard C. Parks had asked their colleagues to instruct the five-member police commission to extend the camera contract on a month-to-month basis for up to a year while additional safety studies are done.

Commissioners were irked by the action -- in particular questioning whether the council had the authority to instruct them to do something.

During Friday's meeting, Councilman Richard Alarcon asked the council's legal advisor whether it indeed had the power to "order" the commission to act. The attorney answered "no" but told council members that they can make a "request."

Still, Councilman Jose Huizar asked the attorney to provide a written analysis of Alarcon's question at next week's meeting.

One of the reasons the cameras have come under fire is because the vast majority of camera-issued tickets since 2004 -- a total of more than 180,000 -- were for illegal right-hand turns. Critics of the program also say that claims of increased safety for motorists are inflated and that the cameras can provide their own dangers.

More than a dozen people appeared at Friday's council meeting to comment on the issue. At least five were employees of American Traffic Solutions, the company that has been operating the network of cameras for the last several years and is seeking to have a new three- or five-year contract awarded.

"Everybody seems to be concerned about the economic aspect of the program and not the safety of our communities," said Johanna Silva, who works for ATS in California.

There was also a heart-wrenching account from the mother of a young USC pharmacy graduate who died in a traffic collision involving a motorist who ran a red light. Alarcon noted that a son of his was killed in one such accident.

"It's not a financial issue for me," he said. "It's a personal issue."

But there were also several speakers and council members who decried the program as inefficient, unnecessary and a waste of taxpayer dollars.

"The cameras give us nothing but expense," said Councilman Paul Koretz.

Another critic of the program was Loma Linda Mayor Rhodes Rigsby, who told the council that after four years of using the cameras in his city there had been almost no reduction in the number of accidents even though scores of tickets were handed out.

He said Loma Linda officials removed their cameras and instead slightly lengthened the time that traffic lights are yellow.