Skip to main content
27
Jun 2018
After losing his leg in crash, LAPD officer returns to work with prosthetic 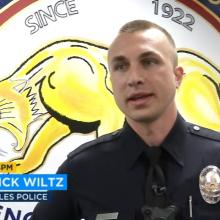 Gregory Lee, KABC
After losing his leg in crash, LAPD officer returns to work with prosthetic

He took part in roll call, a routine way for any officer to start their shift. But for Wiltz, hearing his name called was anything but routine.

Wiltz is back in uniform and back to full duty after he nearly lost his life two years ago.

In August 2015, just a few months into his new job with the department, he was hit by a car while riding his motorcycle in Fullerton.

Three Fullerton PD officers are credited with saving his life, but doctors had to amputate his left leg.

"It was a lot of ups and downs, the prosthetic process is definitely trial and error, you just gotta keep at it," said Wiltz.

He has been outfitted with a prosthetic leg after nearly two years of recovery, rehab, more than 20 surgeries and a series of complications.

But throughout it all, he never gave up hope he would come back.

"His line was 'I'm going to be a cop again' and I knew right then and there, as a training coordinator, as his supervisor, as his friend right there, I needed to change my mindset," said Sgt. Mario Rojas, Wilshire's training officer.

With the support of his family and his LAPD family, Wiltz is back on the job, doing what he always wanted, and motivating others to overcome any obstacle.

"Wake up every day and do whatever I can do to achieve my goals that day. Sometimes you weren't really able to get that far that day, but maybe the next day, you'll be able to get farther."