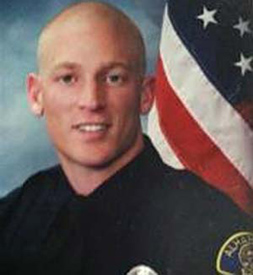 An Alhambra officer was killed early Sunday when two police vehicles collided while responding to an emergency call.

Officer Ryan Stringer, 26, was responding to a call of a possible robbery at 2:30 a.m. in the rear parking lot of 100 N. 1st Street when his vehicle and another police cruiser crashed at the intersection of Garfield Avenue and Main Street, police said. The officer in the other vehicle was also seriously injured.

The two officers were taken to Huntington Hospital in Pasadena, where Stringer later died. The other officer, who was undergoing surgery and listed in stable condition, had not been identified.

Gov. Jerry Brown issued a statement saying he and his wife "extend our deep condolences to Officer Stringer's family, friends and colleagues. In the prime of his life, he made the ultimate sacrifice in the service of protecting his community."

The crash remains under investigation by the California Highway Patrol.