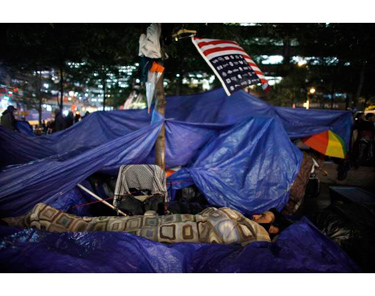 The loosely knit hacker group Anonymous has been aligned with the "Occupy Wall Street" movement from the very start. Its latest action in support of the movement, which has changed from just "Occupy Wall Street" to "Occupy Global," and spread worldwide, is information the group hacked from four police and government websites and released Friday.

More than 600MB of data from the International Association of Chief of Police (IACP) was released, according to a press release from Anonymous. The leaked information includes home addresses, membership rosters, internal documents, passwords, social security numbers and still more.

It also was timed perfectly. The IACP is holding its annual conference in Chicago, this week. At the same time, the IACP website was taken down, and as of Saturday morning it was still down ( image). That's an improvement: for a time the page was replaced with an anti-police rap video (cached here).

The BPPA website has a notice under its current events section that reads: "* Please Note: Starting Monday October 17th 2011 all Users who access the secure section of the site will have to re-register for a NEW Username and Password." That seems to indicate that the BPPA hack was detected prior to Oct. 17, despite it not being posted to pastebin until Friday. However, the "alert" does not give a reason for the new security measure.

In solidarity with the Occupation Movement and the International Day of Action Against Police Brutality, allied #anonymous and #antisec vessels took aim at the corrupt bootboys of the 1%: the police. We hacked, defaced, and destroyed several law enforcement targets, leaking over 600MB of private information including internal documents, membership rosters, addresses, passwords, social security numbers, and other confidential data. According to the IACP's development documents, their systems cost several hundred thousand dollars. We are pleased to destroy it all for free, leaking their private info and defacing their websites in one swift blow. [...]

We are attacking the police because they are the vicious boot boys of the 1% whose role in society is to protect the interests and assets of the rich ruling class. They are not part of the 99%-- they are working class traitors who are paid to intimidate, harass, and repress political movements that would possibly stand a threat to the power structure of the 1%. We have no problem targeting police and releasing their information even if it puts them at risk because we want them to experience just a taste of the brutality and misery they serve us on an everyday basis.

With regard to the Matrix Group, Anonymous said they excluded the 99 percent (emphasis ours):

We attacked MatrixGroup.net, a multi-million dollar Washington DC based web development firm, which serves over a hundred government, corporate and association websites. Many lulz have been had as we owned their white hat "professional" intranet, clients and employee wiki portals-- accessing records and passwords, internal communications, company schedules, and development notes for over a hundred clients. We intentionally excluded the unions and other unrelated sites on their servers because, unlike the police and those who support them, we will never betray our working class comrades. We realize our role in the social struggle against capital and against the state, deciding instead to set our sights on the police, military and other government websites hosted by Matrix.

For the BPPA, Anonymous said (emphasis ours):

Our lulzboats also took aim at Boston Police in retaliation for the unprovoked mass arrests and brutality experienced by those at Occupy Boston.

In terms of Alabama law enforcement, the group said (emphasis ours):

We are attacking Birmingham specifically because of their notorious racial discriminatory practices including the savage beatings and mass arrests endured by civil rights protesters during the 60s.

The press release portion of the pastebin post concludes with Anonymous asking hackers to join in "to make 2011 the year of leaks and revolutions." Anonymous and fellow group LulzSec, earlier, started the Antisec movement against corruption in big business and governments.

Occupy Global, nee Occupy Wall Street, falls right into that mission statement, whether you agree with it or not.