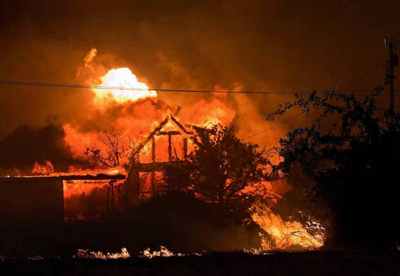 A home burns in Yarnell, Ariz., where the town evacuated in the face of a wildfire. Nineteen firefighters were killed fighting the blaze. (Tom Story / Arizona Republic / June 30, 2013)

Nineteen firefighters died Sunday while battling a fast-moving wildfire northwest of Phoenix, the worst firefighter loss of life in a wildland blaze since 1933.

The firefighters went missing while fighting the Yarnell Hill fire, an out-of-control blaze that had engulfed the evacuated community of Yarnell, population 649, burning down much of the town, officials said. An estimated 200 structures were lost.

The firefighters belonged to the Granite Mountain Interagency Hotshot Crew, an elite unit sponsored by a fire department in nearby Prescott, where residents were grieving through social media after word of the deaths arrived Sunday night.

"This is as dark a day as I can remember," Arizona Gov. Jan Brewer said in a statement. "It may be days or longer before an investigation reveals how this tragedy occurred, but the essence we already know in our hearts: fighting fires is dangerous work."

The blaze was sparked Friday by lightning, officials said, and remained out of control.

He said all of the firefighters had deployed their fire shelters - an emergency measure when there is no escape.

Skurja confirmed that 19 members of the 20-person crew had died. One survivor was hospitalized with injuries, he said, but he did not know the firefighter's condition.

"The fire was very aggressive. It just overtook them," Skurja said.

Roxie Glover, a spokeswoman for Wickenburg Community Hospital, said officials had told her to expect injured firefighters. Then the grim news arrived.

"It became clear that the firefighters had been deceased," Glover said. "We were told that we were not getting firefighters."

But homeowners flooded in, suffering from smoke inhalation as well as shock at losing their homes, she said.

Sunday's incident appears to be the deadliest in modern wildland firefighting. The previous highest number of deaths in a fire came in Colorado on July 6, 1994. There, at Storm King Mountain near Glenwood Springs, 14 firefighters were trapped when a wind-driven blaze blew up a hill.

Since the 1950s - until Sunday - only three other wildfires had claimed the lives of 10 or more firefighters, and each prompted changes in safety regulations and training.

According to National Interagency Fire Center statistics, Sunday's deaths were the worst since 1933, when a fire in Los Angeles' Griffith Park killed at least 25 firefighters.

Officials said some of the Arizona firefighters had been found in fire shelters in the area, where winds occasionally exceeding 40 mph helped fan the flames in 95-degree heat.

Deploying a fire shelter is typically a "last desperate step" for survival, said Timothy Ingalsbee, executive director of Firefighters United for Safety, Ethics and Ecology. "That means they have been trapped."

A couple dozen firefighters are killed on average each year, he said, but 19 firefighters dying in one fire is a "horrific tragedy."

When they are fighting fast-moving fires and trying to save lives and property, "firefighters are put into this no-man's land, having to make these heroic stands ... against the unstoppable force of wildfires," he said.

"Emotionally? We're devastated," Fraijo said. "We just lost 19 of some of the finest people you're ever going to meet. Right now we're in crisis. ... Truly, we're going through a terrible crisis right now."