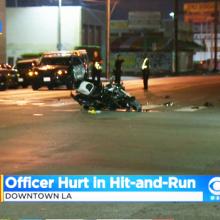 An arrest was made in the hit-and-run crash that left a LAPD motorcycle officer with a broken leg. (credit: CBS)
CBS Los Angeles

Police have arrested the hit-and-run driver of an SUV they said struck a Los Angeles Police Department motorcycle officer, severely injuring him.

“The driver was a juvenile so I can’t give you much information about him,” LAPD Lt. Abe Rangel of the Central Traffic Division.

The male juvenile was allegedly spotted leaving the scene by a security guard who was near the crash site, Rangel said. That guard flagged down an officer who went after the driver.

The unidentified motorcycle officer — who suffered a broken leg — was listed in serious but stable condition, Rangel said.

The crash happened about 9:20 p.m. Saturday, at the intersection of Central Avenue and Olympic Boulevard, Rangel said.

The preliminary investigation indicated the SUV driver was at fault and made an illegal left turn in front of the motorcycle officer, Rangel said.

The vehicle was a green SUV, and officers stopped a vehicle matching that description a few blocks away, a desk officer at Central Traffic Division said.