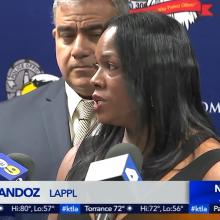 The Los Angeles Police Protective League held a press conference to decry the ACLU’s demand to remove all LAPD Metropolitan Division officers out of South L.A. In the last week of March, according to LAPD Chief Moore, 26 people in South L.A. were shot. Ten of those people have died. The Los Angeles Police Protective League (LAPPL) believes that those promoting these reckless tactics should be called to account for endangering lives. The LAPPL has sent a survey to residents of South L.A. to determine if they agree with the ACLU’s request to pull police officers out of their neighborhoods.