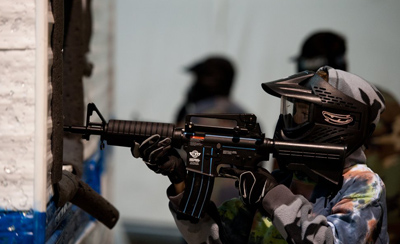 A young man plays a game at Air Soft Battlegrounds in Rocklin last week using a realistic-looking replica of an assault rifle. Senate Bill 798 would add such firearms to the list of semi- and nonlethal weapons that must have a brightly colored exterior. (JOSé LUIS VILLEGAS/[email protected] )

A proposal to curb officer-involved shootings by ordering BB and air guns to look less like Glocks and Berettas is drawing fire from makers, sellers and users of a wide class of weapons.

Law enforcement leaders from Los Angeles want the state to add "airsoft" guns powered by air, gas or springs - those that shoot BBs, plastic pellets or paintballs - to the list of semi- and nonlethal weapons that must have a brightly colored exterior.

After witnessing officers repeatedly fire at people wielding fakes, they say distinguishing colors would result in a positive form of hesitation.

"These guns have become entirely too realistic," said Detective Richard Tompkins, head of Los Angeles Police Department's gun unit. "We're saying it just gives officers another chance, another second before shooting to re-evaluate what appear to be life-and-death situations."

Those who use the look-alikes, for sport at special venues or fun in their backyards, consider it a mistake for dangerous products to resemble children's toys. They warn that police officers will face greater danger if the good guys return imitation guns to black finishes or criminals do the opposite. They also worry that having unrealistic guns will destroy the attractive essence of their sports.

Airsoft gun manufacturers, paintball players and BB gun retailers are among those who have emerged during the past two months to label Senate Bill 798 a job-killer and an illogical attempt at improving public safety.

The measure by Sen. Kevin de León, D-Los Angeles, requires more guns sold in California to have their entire outer surface to be either see-through or contain only bright hues of white, red, orange, yellow, green, blue, pink or purple.

The outcry against the bill recently helped persuade de León to pull from his proposal most paintball guns, which rarely resemble classic firearms. An Assembly committee is expected to consider the amended bill Tuesday.

Federal law already mandates a bright orange ring at the end of barrels on airsoft and some toy guns. A state law approved in 2004 forced all imitation weapons, except the ones de León now wants to add, to feature bright color schemes or be transparent. The law also bars any sort of imitation from being displayed in a public setting - a component that the gun community says officers are not strictly enforcing.

The idea to ban darkly colored replicas was born in December, hours after a Los Angeles Police Department officer shot and injured a 13-year-old boy who had been holding what officers later learned was a pellet gun.

"You would have handled it just a little bit differently (had it not been black)," said Los Angeles Sheriff's Lt. Wayne Bilowit. "It gives you the thought that perhaps it's a toy."

"It's simple, nothing that looks like a gun should be taken out on a street or in public," Ho said.

A decade of relentless military conflict abroad and a rise of video games touting those battles has fueled the growth of gun sports. John Steele, president of airsoft gun manufacturer Softair USA, estimated Californians account for a fifth of nationwide airsoft sales. Others pegged paintball gun sales closer to a tenth. The industries' lobbying coalition thinks as many as 5,000 California jobs could disappear if the guns had to be colorful.

There are at least 200 replica battlefields in California. The gamers range from teens wanting a release to church groups seeking a thrill to military or police veterans searching for a return to combat.

Industry leaders said 75 percent of the players come to immerse themselves in a realistic military scenario. More than 15,000 people have joined Facebook groups telling lawmakers not to ruin that experience.

Tompkins countered that officers don't get to wear helmets or knee and elbow pads.

"Instead of taking the fun sport away from people completely, we're saying if you want something like the real McCoy, it's got to be a different color," he said.

De León has agreed to review the concerns.

"There's a strong feeling that people want these replicas to look real, but it poses a problem when things that look bona fide are on the streets," he said.

The industry wants other options debated. Some say the paintball removal isn't enough.

"There should be more compromise and a push for more safety, education, enforcement," said Gio D'Egidio, an owner of five gun sports fields in Southern California. "Paintball should always have been excluded."