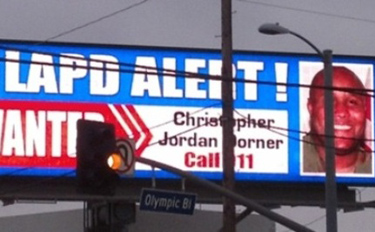 On February 3, 2013, Monica Quan, an assistant coach at Cal State Fullerton and her fiancé Keith Lawrence were found shot to death in a parking garage in Irvine, Calif. The next morning, while investigation into their deaths was just beginning, police discovered a manifesto from former Los Angeles police officer Christopher Dorner. In the rambling document, Dorner spoke of warfare against police and threatened violence against specific members of the LAPD. On February 6, Dorner was identified as the suspect in the deaths of Quan and Lawrence.

In the early morning hours of February 7, 2013, an officer was shot while guarding the home of one of the threatened officers. A few moments later, two officers at a nearby stoplight were involved in a shootout, with one of them killed. Christopher Dorner was behind both attacks. One of the threatened officers being guarded was retired Los Angeles police captain Randy Quan, father of Dorner's first victim, Monica Quan.

That same day, California issued a Blue Alert for only the third time in two years. Like an Amber Alert, a Blue Alert is a public notification system. Instead of alerting the public about an abducted child (or a missing person in the case of a Silver Alert), a Blue Alert shares information about a suspect that has killed or seriously injured a police officer. The alert provides available information, such as suspect's physical description, vehicle and license plate number. California established the system in 2011, which at the time made it the seventh state to do so. The first Blue Alert system was started in Venice, Fla., in 2008 and has expanded to 24 states as of May 2015. The California Blue Alert remained in effect until Dorner died in the midst of standoff on February 12 via a self-inflicted gunshot.

On Saturday, December 20, 2014, NYPD officers Raphael Ramos and Weinjan Liu were sitting in their car on Tompkins Avenue in Brooklyn when Ismaaiyl Brinsley walked past their vehicle shortly before 2:45 pm. About 35 minutes earlier, the Baltimore County Police Department was on the phone with New York's 70th precinct with information that Brinsley was wanted in connection with a shooting in Maryland earlier that morning. They had pinged his cell phone in the area and found threats made against police officers on Instagram. While they were faxing a wanted poster to the precinct, surveillance video had Brinsley in a Brooklyn mall.ADVERTISING

After walking past the officers, Brinsley doubled backed and opened fire on the two officers and killed them. He then ran around the corner to a subway station where he killed himself on the platform. It was at that time that Baltimore County PD sent the flyer information to NYPD's real-time crime center via telatype. It was 2:50 p.m., five minutes after Officers Ramos and Liu had been killed.

While there is a Blue Alert system in Maryland, there is not one in New York, nor is there a system that works across state lines.

Since 2010, Maryland Senator Ben Cardin has introduced a bill to establish a National Blue Alert System. Like the state alerts, it was designed to be activated after an officer was killed or seriously injured, but when it was believed the suspect would cross state lines. He has introduced the bill in every session since, with it never getting out of committee. After the killings of Officers Ramos and Liu, the legislation gained priority. It was updated to include an "imminent and credible threat" to law enforcement officers and the Rafael Ramos and Wenjian Liu National Blue Alert Act of 2015 passed on May 14. The bipartisan supported bill was signed into law by President Obama five days later.

The law allows for the Department of Justice to set up the national communication system and the guidelines for its use. The DOJ will be the coordinating agency for National Blue Alerts. While no time frame has been set, the legislation requires a status update no later than May of next year.