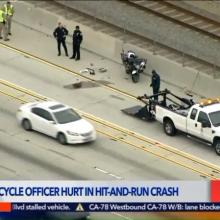 Authorities are searching for a BMW driver after a Los Angeles police officer on a motorcycle was injured in a hit-and-run crash on Interstate 105 in Lynwood early Monday morning, officials said.

The officer was ejected from his bike and taken to the hospital after being struck east of Atlantic Avenue around 5:40 a.m., the California Highway Patrol said in a news release.

The officer, identified only as a 52-year-old man, was traveling west in the carpool lane beside a silver BMW SUV in the lane next to him when the civilian vehicle made an unsafe lane change, authorities said.

The SUV crossed a set of double yellow lines to enter the carpool lane and hit the ride side of the officer's motorcycle, CHP said.

The officer was pushed off his bike by the force of the collision and landed on the freeway's center median, investigators said.

Aerial footage from Sky5 shows an upright motorcycle near the center divider along with small parts that apparently broke off from the vehicle.

The officer sustained minor injuries and was taken to St. Francis Hospital.

The BMW driver, meanwhile, continued westbound and failed to stop. The SUV is possibly an X5 model, officials said.

A description of the driver, who remained at large Monday evening, was not available.