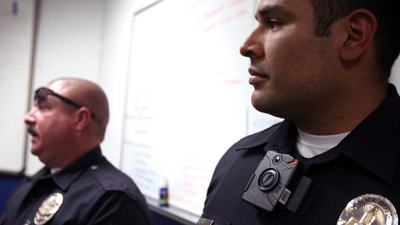 San Fernando Valley residents Thursday night raised concerns about civilian privacy and access to video that would be captured under the Los Angeles Police Department's plan to equip its officers with body cameras.

Dozens of people, gathered in the AGBU Manoogian-Demirdjian School in Canoga Park, questioned whether civilians would have access to the footage and how police officers could be held for their actions since they can decide whether or not to turn on the cameras.

"These cameras are not pointing at police; they're pointing at the public," said Isaac Okopnik Chulsky, a 19-year-old Valley resident. "This is going to be a tool of intimidation."

The meeting was the second of two public forums that the civilian Police Commission convened to gather community input on what policies the department should adopt for the cameras. The first meeting was Wednesday night in South L.A.

Last month, Mayor Eric Garcetti announced the city would purchase 7,000 body cameras to equip all of its police officers, a significant expansion on the LAPD's year-long effort to purchase some 800 cameras with private donations.

Police Commission President Steve Soboroff said Thursday that a policy is still being written regarding the cameras' use, as well as specifics about when the footage is available and to whom it is available.

But he stressed that it was not up for debate whether the cameras would be implemented.

Advocates say the cameras will be a valuable tool for the department. The ability to record interactions between police officers and civilians could help guard against officer misconduct and clear officers falsely accused of wrongdoing.

The cameras - Taxer Axon devices about as big as a police badge that can be worn in the middle of an officer's chest - are turned on when the officer holds down a button for several seconds to activate it. The activation differs from the cameras in squad cars, which turn on automatically when an officer turns on the vehicle's light bar, said LAPD Sgt. Dan Gomez, who demonstrated how the cameras work.

Several in the crowd expressed concern about the privacy of stored video, which will be uploaded to a secured cloud storage service.

Others said the cameras would create a negative and untrusting atmosphere between officer and civilian and that it would allow officers to craft their side of an incident after viewing footage the public hasn't seen.

"If there's going to be video footage, that footage should be able to be available to both sides so we can have an equal playing field," said Topanga resident Julie Levine.