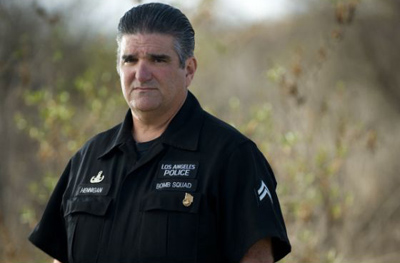 Mike Wigginton calls it the best job in the world, but going to work scares him.

"Anyone who says they're not scared is lying," he said. "Anytime you deal with live ordnance and you don't have a little fear, you become careless."

Wigginton, a deputy with the Orange County Sheriff Department's bomb squad, this past week recalled his days as a member of the elite Explosive Ordnance Disposal Detachment from Camp Pendleton. They are some of the best and highest trained military in the world. Across all military branches, bomb technicians are a small, close-knit community, which lost four of its members Wednesday during a blast while clearing a base artillery range of unexploded ordnance.

"This is the job where things that don't seem harmful will kill you," said Wigginton, 42. "You can do everything right and still die. You're dealing with unstable ordnance that was armed-up and expected to detonate and something stopped. We have to go out on something unstable without getting injured or harming our teammates."

In Iraq and Afghanistan, EOD technicians executed some of the most crucial and dangerous missions where buried bombs have been used as a weapon of choice against U.S. and coalition troops. EOD technicians and their mission - to locate and render safe all explosive ordnance - have evolved through more than a decade of war. Techniques and equipment have become more specialized by combat knowledge and training has become more intense.

In that time many paid the price. More than 28 bomb technicians died in Iraq and Afghanistan.

The four killed this week at Camp Pendleton all had combat experience and 41 combined years in the Corps. Marine officials said there was no live fire going on when the accident happened at 11 a.m. on the base's most southern range.

It has been nearly 20 years since a Marine bomb technician died in a range sweep. That accident occurred at Marine Corps Air Ground Combat Center Twenty-Nine Palms.

"We don't have a lot of accidents," Wigginton said. "Reports have been filed and procedures have been changed. In other cases, everything was done right and it was just an unstable explosive."

Range sweeps are just one of EOD technicians' missions. Before going out, they study the area and know what ordnances they might find. A clearance operation means stuff gets blown up.

Technicians wear field uniforms and a cap. They divide the range in quadrants and work in teams. They cover every inch in slow, methodical steps. Their eyes don't leave the ground. Ordnance can be buried, semi-buried or lying on the ground in plain sight. Most ranges are dirt.

Technicians also comb through bushes, tress and tall grass. They don't kick, throw or pick up anything. They mark each piece of ordnance so team members know which has been identified need to be avoided.

Once the range has been covered, technicians return to the ordnance. They blow up some pieces, others are deactivated with another bomb that counter-charges it. Ordnance can weigh just few ounces to hundreds of pounds.

"I always enjoyed them, we learned a lot," Wigginton said of the sweeps. "It's stuff you can't learn in a classroom. You get to see it in a non-pristine state. It allows us to ID parts, pieces and components that we'll see again later."

Bomb technicians are required to know all U.S. ordnances, their fusing systems those used by NATO and the enemies.

The job isn't for anyone.

Applicants are self-motivated, fearless leaders who work well independently but who also can be part of a team. Technicians go to an academy at Eglin Air Force Base in Florida. The program has the highest attrition rate in the country, Wigginton said. The Naval School Explosive Ordnance Disposal - known as Schoolhouse - is jointly staffed by Army, Navy, Air Force, and Marine Corps personnel.

Prospective technicians must have served at least four years in the Marine Corps and come with recommendations. There are intense interviews and security clearances. Those selected then have to wait for a seat to open up at the school. Some transfer to EOD commands to get supervised on-the-job training. Physics, chemistry and math are musts. So are high grades. After a year, techs return to their commands for a probationary period. Those with skills and interest remain.

The job is the most dangerous in the Marine Corps and one of a few jobs in the Corps that allows team members to quit. In his 14 Marine Corps career - four years active and 10 in reserve - Wigginton recalls only one EOD quitting and a second being kicked out.

Steve Hennigan, now with the Los Angeles Police Department's bomb squad, was a machine gunner in the Marine Corps. In the infantry, he and other Marines relied on the expertise of EOD technicians.

After retiring from the Corps, Hennigan, 48, learned to diffuse explosives. Law enforcement trains six weeks in an Alabama school run by the Army and FBI. They also cross train with bomb technicians from Camp Pendleton.

Just a month ago, Hennigan trained with the four Marines killed in Wednesday's blast. Local police such as LAPD and Orange County Sheriff Department rely on Marine EOD training and expertise when military ordnance is found off base. That happens 20 to 25 times each year in Los Angeles, Hennigan said.

"We get called when World War II, Korean and Vietnam veterans pass away and their families come to clear their house and find pieces of live ordnance, he said.

'Living by our skills'

Any day, on base or off, EOD technicians respond to suspicious or unattended packages. They regularly do range sweeps and diffuse armed military ordnance. The technicians must not only be able to recognize ordnance but know their design and function. They blow things up and how to safely diffuse it.

In 2010, Joshua Cullins, an EOD Marine reservist and team member of Hennigan's, was serving in Afghanistan's Helmand province when he was killed in an explosion. Hennigan joined Cullins' father and flew to Dover, NH. to accept his body. Cullins was 28.

On his arm Hennigan wears a bracelet with the names of 28 EOD technicians killed in Iraq. He knew seven of them.

"We live by our skills," Henniganh said. "I've lost a lot of friends. Some people call us crazy but we're not. We're people who like challenges and to deal with the unknown."