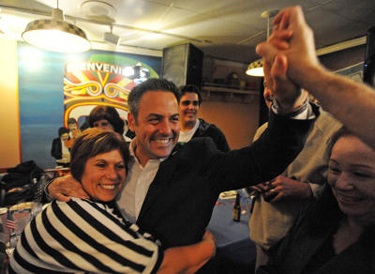 The two will face each other in a Jan. 17 runoff election.

With all of the precincts counted in Tuesday's special election, Buscaino finished with 29.1 percent, followed by Furutani with 22.3 percent.

Furutani said the campaign ahead will be spirited, with two candidates offering plenty of contrast.

"It was very interesting to see Joe's campaign and to see mine," Furutani said late Tuesday. "He really went with the issue of being the local guy. My aim was to go for the whole 15th District."

San Pedro businessman Jayme Wilson, whose campaign refused to use any public matching funds, came in third with 12 percent of the vote.

"It's amazing," Buscaino said of the evening's first results, which had him a full 10 percentage points ahead. His lead narrowed a couple of hours later.

"Since Day One, we set some goals and expectations and we've exceeded all of our expectations."

Buscaino managed to galvanize many in the community who came from opposite sides of the political spectrum in an upbeat campaign that stressed the candidate's hometown roots.

The key to his early popularity, he said, was "being here all my life, raising my family here, being involved in nonprofits, working here as a street cop, and having that love, commitment and dedication to this community."

In a campaign that filled mailboxes and lined area streets with signs, the political free-for-all in the San Pedro-to-Watts district drew intense interest, some high-profile names - and some big money.

It was the first time the seat had been open since Hahn won in 2001.

Early favorites were McOsker, 51, who stepped aside temporarily as president of the city's firefighters union, and Furutani, who had the backing of the county and state Democratic Party.

Svorinich also was viewed as potentially a key player, having represented the district from 1993 to 2001 and seeking yet one more term under the city's expanded term-limits law.

But it was Buscaino who emerged early as a grass-roots favorite, especially among voters in San Pedro, where his lawn signs were prolific.

The San Pedro native managed to parlay his years as a senior lead officer - and a familiar presence at Neighborhood Watch meetings and teen conferences that he helped organize and sponsor - into a popular campaign that attracted widespread support.

"People are looking for a new generation of leadership," he said.

Political veteran Furutani, 64, cut his political teeth during the civil rights era when he was a college student. The Harbor Gateway resident has built his name and reputation on serving in a succession of elected posts, including the Los Angeles Unified school board, the Los Angeles Community College board and, currently, the state Assembly.

Furutani said the runoff offers voters a difference in outlook and generation.

"Just in terms of experience and age, we come from different generations," Furutani said. "I think there's a big difference."

Whoever wins the January runoff will finish out the remainder of Hahn's council term and then be eligible to run for a full, four-year term in 2013.