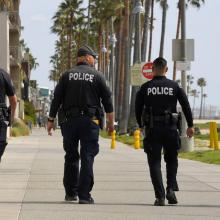 The largest police unions in California unveiled plans early Sunday morning for a reform agenda to find racist police officers and “root those individuals out of the law enforcement profession.”

In full-page ads in The Washington Post, Los Angeles Times and The Mercury News, the San Jose Police Officers Association, the San Francisco Police Officers Association and the Los Angeles Police Protective League announced the national reform plan as thousands continue to march in the streets to protest the May 25 police killing of George Floyd in Minneapolis and others killed by law enforcement officers.

“No words can convey our collective disgust and sorrow for the murder of George Floyd,” the unions said in an advertisement. “We have an obligation as a profession and as human beings to express our sorrow by taking action.”

The plan pulls in various initiatives that the departments have individually implemented over the past several years and calls for reforms that include the creation of a national database of former police officers who were fired for gross misconduct to keep other agencies from hiring them as a beginning point for change.

Unions are also calling for a national use-of-force standard that “emphasizes reverence for life, de-escalation, a duty to intercede, proportional responses to dangerous incidents and strong accountability provisions mirrored after the Los Angeles Police Department.

Copying from the San Francisco Police Department, the police unions are calling for an “early warning system” to identify officers that may need more training and mentoring.

The three police unions are also calling for ongoing and frequent training of police officers to build and refresh their skills to improve police and community outcomes similar to California Senate Bill 230 as well as mandating a transparent publicly accessibly use-of-force analysis website similar to the San Jose Police Department.

“Our unions are committed to the continuous improvement of policing in America,” the unions said in a statement. “We believe that each of our departments has made tremendous strides in strengthening accountability, transparency and adopting policies that reduce the number and severity of uses-of-force. However, we can do more, and we believe this agenda should be adopted across our nation as an important step toward improving police and community outcomes.”