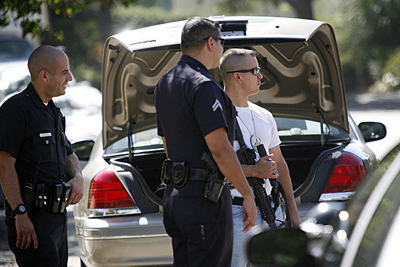 LAPD officers on Arrowhead Drive in the Hollywood Hills, where they are investigating a hoax connected to a reported home invasion robbery call Wednesday at a Hollywood Hills residence owned by actor Ashton Kutcher. (Bob Chamberlin / Los Angeles Times / January 24, 2013)

Alarmed that pranksters have called 911 to report false emergencies at the homes of celebrities including Justin Bieber and Tom Cruise, two Southern California legislators have proposed laws to get tougher with anyone engaged in "swatting."

A bill announced Wednesday by state Sen. Ted Lieu (D-Torrance) would allow longer sentences for and greater restitution from those convicted of making false reports to the police. Los Angeles County Sheriff Lee Baca asked for the measure.

A similar proposal has been introduced by Assemblyman Mike Gatto (D-Los Angeles).

"The recent spate of phony reports to law enforcement officials that the home of an actor or singer is being robbed or held hostage is dangerous, and it's only a matter of time before there's a tragic accident," said Lieu.

On Monday, someone called police with a false report of domestic violence and a possible shooting at the Hollywood Hills home of singer Chris Brown, who was not there at the time.

Also last week, a 12-year-old boy was charged with making false threats about supposed incidents at the homes of Bieber and actor Ashton Kutcher.

Others believed to have been targets of swatting incidents in the last year include "The X Factor" judge Simon Cowell, singer Miley Cyrus and the Kardashian-Jenner family.

Baca asked Lieu to introduce a bill "because this phenomenon is increasingly becoming more of a challenge," said Steve Whitmore, a spokesman for the sheriff. "He believes increasing the penalties, including increased jail time and financial responsibility, will bring this serious, albeit new, crime to the forefront, exactly where it belongs."

Gatto and Lieu both propose that those convicted of making false 911 reports be liable for all costs associated with the police response. Such pranks are "a complete waste of law enforcement resources," said Gatto.

The Assemblyman's measure, AB 47, would also increase the maximum fine for conviction from $1,000 to $10,000 and make it easier to file murder charges if someone is killed in a swatting incident.

Existing penalties for false 911 reports include up to one year in jail, but an offender may get probation with no jail time. Lieu, a military reserve prosecutor, wants to set a minimum sentence of 120 days in jail.

Lieu's proposal also would make it easier to charge someone with a felony if a victim is hurt as a result of a prank call. In felony cases, the penalty could increase to three years in jail. And prosecutors would no longer have to show that the prankster knew injury or death would occur.

Both bills would apply to incidents involving anyone in California, not just celebrities. But the Legislature has drawn criticism in the past for measures intended primarily to protect the famous.

In 2009 and 2010, the Legislature and then-Gov. Arnold Schwarzenegger approved laws restricting paparazzi, including one that stiffened penalties for those caught driving recklessly or blocking sidewalks to photograph celebrities.