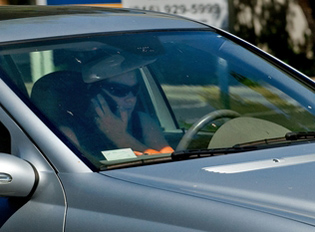 More than 20 percent of respondents to a state Office of Traffic Safety survey said talking on cell phones is the biggest safety problem on state roads.

In what safety officials call a dramatic reversal, Californians now believe talking on a cell phone while driving is more dangerous than speeding, aggressive driving or drunk driving. More than 20 percent of respondents to a state Office of Traffic Safety survey said talking on cell phones is the biggest safety problem on state roads. Eighteen percent listed texting as the worst problem, followed by speeding/aggressive driving at 17.6 percent and drunk driving at 13 percent.

Those opinions are not backed up by statistics, which continue to show drunk driving is the most common cause of roadway injuries and deaths. Safety officials also say they believe texting is more dangerous than talking on cell phones because it takes drivers' eyes off the road longer. Chris Cochran of the state Office of Traffic Safety said drivers tend to see more motorists talking on cell phones than texting, which is harder to detect.

Safety officials, however, said they are pleased that Californians recognize cell phone conversations are a serious distraction to drivers. "Distracted driving is something we want to curb early, so it doesn't become entrenched," Cochran said.

Law enforcement nevertheless will continue to focus heavily on stopping drunk driving and speeding, while continuing to stop motorists for illegal cell phone use, Cochran said.

Notably, the survey found the percentage of drivers who admit talking on cell phones while driving has dropped in the last year. It remains legal in California to talk on a hands-free cell phone while driving, but safety officials say they believe that is as much as dangerous as talking on handheld cells. Cochran said his office encourages drivers to avoid any cell phone use while on the road.