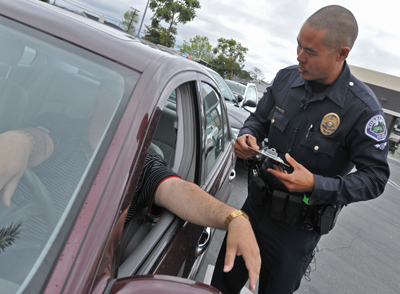 Nick Olson was jamming to Bob Marley on a rainy Sunday morning in Redondo Beach, driving to a friend's house, when he saw the red-and-blue flashing lights in his rear-view mirror.

The 49-year-old computer- parts salesman was about to pay a steep price for not coming to a complete halt at a stop sign.

His penalty would include a $234 ticket, a $65 traffic school fee to keep the infraction off his driving record and another payment for the traffic school course.

"It was a 'California stop' - almost a stop - nobody was walking or driving there," Olson said. "It's not like I was driving drunk. If it was a DUI, I'd say 'throw the book at me.' Technically I was wrong, but the fact that it was so much - what am I actually paying for?"

State legislators, faced with a crippling $10 billion budget deficit, have added a slew of new penalties to traffic violation fines since 2009 and are considering more assessments for those who are convicted of moving violations.

Ticket fines in Los Angeles County are a combination of a base fine and 15 added penalties that are either a flat fee or are calculated as a percentage of the base fine.

Olson's base fine for running the stop sign was $35, but he had to pay a $234 ticket once penalties and assessments were included. Traffic school fees and fines added another $100.

To help ease the state's budget troubles, legislators have added several new assessments to traffic fines since 2009, including a $35 "state conviction fee" and penalties that raise money for new courthouse construction.

Among other increases, state security fees doubled to $40 in recent years, and legislators tacked on a $4 penalty to traffic tickets to fund emergency air transport services due to increased Medi-Cal funding of that service.

Perhaps the most notable of new increases under consideration is a proposal that would raise the base fine from $20 to $50 for talking or texting on a cellphone while driving. If that base fine goes up, state and local penalties would cause the $160 ticket to nearly double, and rise to more than $300 in Los Angeles County.

That bill was passed by the state Senate last month and is awaiting a vote in the Assembly.

Other traffic violation fine penalties have been proposed in the Legislature. They include a $3 fee to go to spinal cord injury research, and an increase to the existing DNA identification fines on all criminal offenses including traffic violations.

Kris Vosburgh, executive director of the Howard Jarvis Taxpayers Association, said the organization has had an increase in calls from people frustrated by costly traffic tickets, even though they are not considered a tax.

"They're definitely becoming abusive," Vosburgh said. "Rather than a deterrent, government has come to look at this as an opportunity to expand revenue. Revenue is the first priority, and public safety is a far second."

State Sen. Ted Lieu, D-Torrance, said he voted for the recent increases to traffic infraction penalties - including the talking-while-driving fee increase and additional fees to pay for court construction - because the funds bring in needed revenue and increase the motivation for people to follow the law.

He cited California Highway Patrol statistics that show enforcement of traffic violations leads to a decrease in crashes. The CHP determined that drivers who use hand-held devices are four times more likely to get into an injury collision.

"I thought generally it was good to have increased compliance," Lieu said. "There are studies that show that the higher you increase a fee on whatever it is, the less likely it is that someone will violate that law or regulation.

"It's the whole concept of deterrence. If we made this fine $10,000, we'd effectively shut down everyone from doing it. But I wouldn't vote for something like that."

Existing traffic fee penalties are up significantly from 10 years ago, as Ken Breding of Gardena noticed when he was ticketed recently for rolling through a stop sign.

"I'm a self-employed, single father and, right now with the economy, I'm living paycheck to paycheck. So that (ticket) was a hard chunk to swallow," said Breding, 48. "It's like sticker shock when you see (the ticket cost). That's two months of groceries for me."

Base fines for traffic infractions remain largely unchanged from a decade ago. They generally range from $35 to $100. But penalties and assessments added by state and county legislators hike ticket costs by hundreds of dollars.

In 2001, making an illegal U-turn in the county, running a stop sign or failing to stop for a pedestrian on a crosswalk came with a $104 ticket. Driving 1 to 15 mph over the speed limit cost $77 and running a red light was $271.

Retired state Sen. George Runner, R-Santa Clarita, now a member of the state Board of Equalization, said he believes traffic tickets are too expensive now. He voted against Senate Bill 1407 to finance new court construction with increased traffic violation fees. That bill, passed in 2009, also imposed a $35 "state conviction fee" for traffic infractions.

"I think it got to a tipping point where these fees became too onerous," Runner said. "I don't know where the line is, but I can't believe anyone would say a fine over $500 for running a red light is fair. I think anyone and everyone sees that as unfair."

Fines paid for Vehicle Code moving violations go directly to the county court system and are distributed to a variety of state and local funds. The city where the violation occurred receives a small portion.

Hawthorne is also one of many local cities that has a red-light camera photo enforcement system to catch people who run red lights at some of its major intersections.

The city pays Redflex Traffic Systems a flat rate of $235,200 per year to operate the cameras at four intersections. Redflex workers monitor video feeds caught by automated recordings of red-light runners, and then send those videos and pictures to Hawthorne Police Department traffic officers for review.

If officers agree that the motorist committed a violation, then Redflex sends a citation in the mail along with photos of the violation occurring. Violators will find a bill for $480 in the mailbox.

"There are certain traffic violations that are inherently more dangerous for an injury crash to occur," Tomatani said. "Speeding, running a stop sign and running a red light are violations I would assume are going to carry higher fines than not having a front license plate or having a missing bumper."

Breding, the 48-year-old Gardena man ticketed for running a stop sign, said he doesn't mind being penalized for his infraction but thinks the punishment is too harsh for the crime.

"I broke the law but it seems these days that the traffic ticket is not about enforcing the law," he said. "It's more about increasing revenue. It's become more of a business than law enforcement."