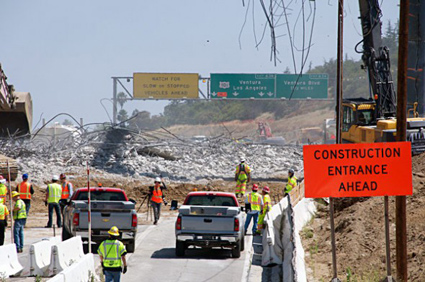 Rubble on the 405 freeway being cleaned up during Carmageddon I in July, 2011. (Gary Leonard/Metro).

The second 10-mile closure of both directions of the I-405 over the Sepulveda Pass, popularly known as "Carmageddon," has now been scheduled for Sept. 29-30, 2012 when contractors will demolish the remaining side of the Mulholland Bridge. Motorists throughout the State of California are advised to "Plan Ahead, Avoid the Area, or Eat, Shop and Play Locally" to avoid generating extreme auto congestion in the project area and throughout the greater Los Angeles region.

The I-405 is the nation's busiest freeway and will be closed in both directions for 53 consecutive hours between the I-10 and U.S. 101. Half a million motorists drive this portion of the I-405 over a typical weekend.

"This closure will surely impact the nearly 250,000 motorists from all over the county that travel the Sepulveda Pass each day on the weekend," said Metro Board Chair and L.A. County Supervisor Michael D. Antonovich. "Law enforcement, transportation and emergency response agencies strongly advise that county residents make plans in advance to use an alternate route or transit."

On Friday, September 28, ramps along the 10-mile closure area will begin to be shut down as early as 7 p.m., and closure of individual freeway lanes will begin at 10 p.m. to ensure full freeway closure by midnight. The closure is scheduled to continue until 5 a.m. Monday morning, Oct. 1. Ramps and connectors will be reopened by 6 a.m. During this closure, the Mulholland Bridge, I-405 freeway and access ramps will be closed.

As with the previous I-405 closure, Sepulveda Boulevard is intended as an alternate route for local resident access only. Sepulveda Boulevard does not have the capacity to accommodate both local and diverted freeway traffic. Motorists should instead use alternate regional freeway routes to completely bypass the area. These include the 5, 15, 23, 55, 57, 101, 118, 126, 210, 605 and 710 freeways.

"Last year, we proved that Angelenos far and wide could rise to the occasion and cooperate with authorities to turn Carmageddon into 'Carmaheaven' free of apocalyptic traffic congestion," said Antonio Villaraigosa, L.A. City Mayor and Metro Board Member. "It was truly one of L.A.'s finest moments. We are again calling on the public to do its civic duty. Do not become complacent. Rather, let's join together to enjoy another car-light or car-free weekend with family and friends Let's all help get this critical job done safely and without incident."

The potential for gridlock is markedly greater this time due to several critically important factors. First, public apathy increases the risk following an aggressive internationally publicized outreach campaign warning of extreme road and freeway congestion that was successfully averted last year. More motorists may now be tempted to rejoin local roads and freeways, which has the potential to create the very traffic congestion and multi-hour delays transportation and law enforcement officials have warned about.

Secondly, the contractor's early completion of demolition work ended the first freeway closure 17 hours earlier than previously scheduled. This time, the contractor is unlikely to complete the work early because it has more demolition work to perform within the same 53-hour period. Two sets of bridge columns, rather than one the prevous year, must now be removed. Demolition work will also be more complicated due to the presence of inactive utility lines not present in the previous bridge demolition work.

Lastly, the serious risk factors to the regional road and freeway system have not changed from last year. The I-405 is still the nation's busiest freeway. The demolition work is still being performed in a canyon with no immediate, effective north/south alternatives. The closure area still connects with I-10 and U.S. 101, both major interstate freeways with their own capacity limitations. There is still limited elasticity in the overall regional freeway system to accommodate diverted I-405 freeway traffic.

"During Carmageddon I, drivers proved the skeptics wrong. They heard our warnings and stayed off the roads, creating a traffic breather not seen since the free-flowing freeways of the 1984 Olympics," said L.A. County Supervisor and Metro Board Member Zev Yaroslavsky. "I have every confidence they'll rise to the occasion again. So give your stress a rest. Get out of your cars. Take a walk, plant a garden, have a barbeque with neighbors. Let's make this another Carmageddon-Schmarmegeddon experience for us all."

Motorists who must travel during this weekend are advised to plan ahead, monitor real-time traffic conditions prior to beginning their trips, and follow alternate routes that are provided. Motorists will be informed of the closure in advance by Caltrans-operated freeway message signs with coverage extending into neighboring counties and other metropolitan regions throughout the state.

Public transportation options are available such as the Metro Rail service within L.A. County and Metrolink servicing the five county Southern California region.

The demolition and reconstruction of the Mulholland Bridge is required to widen the freeway as part of the I-405 Sepulveda Pass Improvements Project. The $1 billion, 10-mile northbound carpool lane construction project is a joint effort between Metro and Caltrans, and is being constructed by Kiewit Infrastructure West Co. It is scheduled for completion in 2013.