Skip to main content
02
Aug 2012
Carmageddon II warning: Stay away from the 405 Freeway 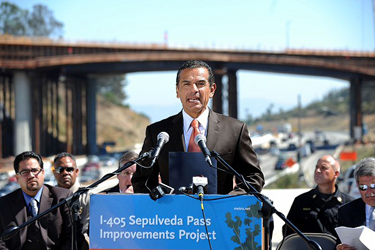 Mayor Antonio Villaraigosa speaks during a press conference detailing "Carmageddon II" on Aug. 2, 2012 in Los Angeles. The second I-405 closure is scheduled for the weekend of Sept. 29-30, 2012. Officials are once again asking for the public's cooperation to plan ahead to avoid major congestion impacts during the 53-hour closure on the I-405 between the I-10 and U.S. 101 for Mulholland Bridge demolition. (Andy Holzman/Daily News Staff Photographer)

With Carmageddon II looming, local officials urged the public Thursday to stay away from the 405 Freeway on the last weekend of September, and instead shop, eat and play in their own neighborhoods.

"Whatever the hell you do, don't come anywhere near the 405 corridor," Los Angeles County Supervisor Zev Yaroslavsky warned during a news conference on a bluff overlooking the San Diego Freeway.

"Do what you did last year... Stay the heck away from here."

But Yaroslavsky added people don't have to be cooped up at home from Sept. 28 to Oct. 1, when a 10-mile stretch of the 405 will be closed for construction workers to complete demolition of the Mulholland Bridge. | See photo gallery.

"We don't think you need to tank the local economy in order to make Carmageddon work," he said. "(People) should go shop in their neighborhood, go to local movie theaters, local restaurants."

During Carmageddon I in July last year, people heeded warnings of apocalyptic traffic congestion and ditched their cars.

A study by the Rand Corp. and UCLA showed the volume of traffic on the open parts of the 405 Freeway that weekend dropped 60 to 75 percent. On parallel routes, the decline was about 30 to 50 percent.

Mayor Antonio Villaraigosa urged people not to become complacent just because Carmageddon I was uneventful.

"Last year, we proved that Angelenos far and wide could rise to the occasion and cooperate with authorities to turn Carmageddon into 'Carmaheaven,"' he said. "We are again calling on the public to do its civic duty."

Construction crews in Carmageddon I finished their job ahead of schedule, prompting the 405 to be reopened 17 hours earlier than expected.

Villaraigosa quashed hopes of a repeat, warning the demolition work has become more complicated. There are more bridge columns and utility lines that have to be removed, among other added tasks.

"The idea of finishing early like last time - probably not going to happen," he said. 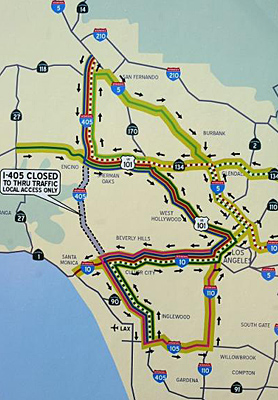 A map displayed during a press conference detailing "Carmageddon II" on Aug. 2, 2012 in Los Angeles shows which portion of the San Diego (405) Freeway will be closed Sept. 29-30, 2012, plus alternate routes that can be used during the 53-hour closure on the I-405 between the I-10 and U.S. 101 for Mulholland Bridge demolition. (Andy Holzman/Daily News Staff Photographer)

"Construction crews will again be battling time to complete the demolition work," Yaroslavsky added. "Only this time they'll have a third more work to do in the same amount of time."

Carmageddon II will require shutting down the 405 Freeway between the 10 and 101 freeways for 53 hours.

Ramps will be shut down starting 7 p.m. on Friday, Sept. 28. Full freeway closure is expected by midnight.

The demolition work should be completed by 5 a.m. on Monday, Oct. 1. Ramps and connectors are slated to reopen at 6 a.m.

It's all part of a $1.03-billion project to add a northbound car-pool lane on the 405, one of the region's busiest freeways, carrying an estimated 250,000 motorists daily on weekends.

California Highway Patrol assistant chief Calvin Aubry urged people not to break into the closed section of the freeway, as some did last time.

"For those who are seeking publicity or trying to create a YouTube moment, you will be arrested and prosecuted," he said.

"Our Number One priority is to keep these workers safe during this closure, and we'll have a significant amount of increased law enforcement presence and patrols to make sure that happens."

Contractor Kiewit Infrastructure West Co. was offered - and ultimately collected - a cash incentive after Carmageddon I when it finished the demolition work ahead of schedule.

This time, there is no incentive. Instead, construction crews will be penalized if the work takes longer than planned. They do have an eight-hour cushion.

"Disincentives are what will be in place, which they normally are for not opening on time," said Michael Barbour, who is in charge of the 405 Freeway widening project.

So far, the project remains on budget but the construction work is about four months behind schedule, with completion expected by fall 2013, according to Metro spokesman Marc Littman.

In an email, he said the delays were caused by complications with right-of-way acquisition and utilities. Also, the construction schedule was adjusted to minimize impact on schools.

"At this point we should have substantial completion in fall 2013, though we're trying to make up some time," Littman wrote. "I understand most of the issues have been resolved."

Los Angeles International Airport has also launched a Web page with more information for air travelers that weekend, at www.lawa.org/lax/405. The airport expects more than 172,000 passengers, in 66,000 vehicles, each day that weekend. FlyAway shuttle buses will operate as usual but will follow the recommended freeway diversion routes.