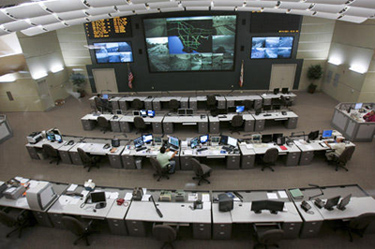 The Traffic Management Center at the Caltrans LA Regional Transportation Management Center which monitors all the Los Angeles freeways. The 405 freeway will be shut down from the 101 to the 10 freeway beginning friday evening. (David Crane/Staff Photographer)

With Carmageddon looming, transportation officials said Monday they will rely on airborne CHP officers and vehicle-tracking sensors embedded in the pavement to monitor congestion and help keep motorists moving.

"We're going to have traffic management teams out in the field, responding to hotspots, diverting traffic as needed."

A stretch of the San Diego (405) Freeway - one of the country's busiest interstates - will be shut down from late Friday through 6 a.m. Monday so crews can demolish a portion of the Mulholland Bridge to make room for a new carpool lane.

The closure of the northbound 405 will span 10 miles, from the Santa Monica (10) to the Ventura (101) freeways. On the southbound side, it will extend four miles between the 101 and Getty Center Drive.

Despite all of the precautions, Caltrans is still urging motorists to steer clear of the Sepulveda Pass.

"Most people go through their lives trying to avoid the 405," Miles said at a news conference that introduced reporters to the command center, known as the Traffic Management Center. "This is the one weekend we want to tell you: You really need to avoid the 405.

"I know a lot of people think they know the secret passages through the Sepulveda Pass," he added. "There aren't any - everybody else knows them too."

The command center is located near the Glendale (2) and Pasadena (134) freeways. It occupies a sprawling room with high ceilings and giant screens showing real-time footage of freeway conditions and maps that pinpoint how traffic is flowing.

For those souls willing to brave what Los Angeles County Supervisor Zev Yaroslavsky predicted would be the "mother of all traffic jams," Miles said transportation and public safety agencies are coordinating efforts to minimize the disruption.

Any rerouting will be announced on local radio stations, and posted on websites such as go511.com. Motorists also can call 511 for more information.

The CHP, meanwhile, plans to have aircraft check for stalls and accidents on the roads, so crews can immediately remove them.

Several hospitals have decided to rent hotel rooms so their staff can avoid having to drive to work. The Los Angeles Fire Department has identified helicopter landing zones in case patients need to be airlifted, and plans to put emergency equipment in strategic locations to respond quickly to calls for help.

Miles said Caltrans will work with the CHP, Los Angeles Police Department and Los Angeles Department of Transportation to help move traffic. LADOT has its own traffic management center. The situation will also be monitored from the Emergency Operations Center in downtown Los Angeles.

The Metropolitan Transportation Authority's highway program executive director, Doug Failing, said he is confident the freeway will reopen as scheduled at 6 a.m. Monday, noting the contractor faces steep penalties for any delays.

Kiewit Infrastructure West Co. will have to pay $6,000 every 10 minutes for each side of the freeway - northbound and southbound - that remains closed after the deadline.

"It's a good contractor," Failing said. "We've all pored over the schedule (and) we have no reason to believe he's in any danger of giving us any money."

Crews will begin closing the freeway ramps at 7 p.m. Friday, to have full closure by midnight. Afterwards, 85 trucks will dump a 15-foot-tall bed of sand on the freeway underneath the bridge to keep the lanes from being damaged by falling debris.

Specialized saws will then be used cut the bridge down the middle, longitudinally, and then hydrohammers will be brought in to knock down the pieces.

Miles urged motorists to bear with the inconvenience, as it will ultimately lead to faster commuting times. He noted the new carpool lane to be built on the 405 is intended as part of a network of carpool lanes stretching 48.6 miles from San Fernando to Orange County.