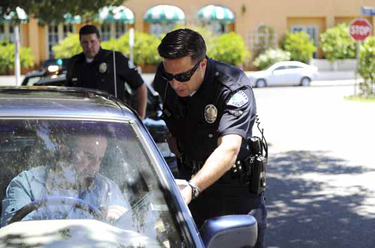 In any other month, some officers might have turned a blind eye to Osvaldo DeAguiar as he chatted on his cellphone while driving his Volvo down Ventura Boulevard in Sherman Oaks.

But DeAguiar became one of tens of thousands of drivers caught up in a distracted-driving crackdown this month by law enforcement agencies throughout the state.

To mark the state's first Distracted Driving Awareness Month, officers followed a nearly zero-tolerance policy on those violating the law requiring the use of hands-free cell phone devices while driving, or engaging in other distractions.

The number of drivers cited still wasn't final, but at least 20,455 were ticketed statewide during the first two weeks of the campaign, with 55 percent of 280 law enforcement agencies reporting, according to the state Office of Traffic Safety. California Highway Patrol officers were issuing tickets at twice the normal rate.

"The law is the law, and you have to follow the law," DeAguiar said with resignation after he was issued a ticket by LAPD. "But I think the city needs money. That, I don't agree with."

The tickets - starting at $159, with subsequent violations costing $279 - are the price to pay for those caught with phone in hand as authorities try to prevent distracted driving accidents, which can also be caused by eating and drinking, grooming, using a GPS or fiddling with the radio.

Drivers who use cellphones while behind the wheel are four times as likely to get into injury crashes, according to the U.S. Department of Transportation. And using a cellphone, whether hands-free or not, delays a driver's reactions as much as having a blood alcohol level of .08 percent, or the legally impaired limit for driving, according to studies.

The belief that cops are heavy-handed in issuing tickets just to rake in money is a familiar one to Officers John Holliday and Ray Navarro of LAPD's Valley Traffic Division, who cited DeAguiar after spotting him with the telltale crooked elbow holding a phone up to the side of his face.

"It's a shame that it might cost that individual some money," Holliday said. "But it might save him from a traffic collision around the corner."

The arguments that the cops should be doing something more important or that they should be more lenient are familiar ones also.

But it's all about changing a dangerous behavior of people who don't correlate the use of a cellphone to be a distraction that could result in injuries or fatalities, Holliday said.

"People will say to us, 'Don't you have anything better to do than writing tickets?' " Holliday said. "But they don't see the aftermath.

"I've seen fatalities where people have been on their cell, people making left-hand turns and boom, they turn in front of a car," said Holliday, who was a collision investigator. "Most of the time, they're distracted."

Navarro recalled accidents where children were run over, such as 16-year-old Conor Lynch, a Notre Dame High School athlete killed in Sherman Oaks in October.

Lynch was struck by a car as he was jogging across the street midblock during cross-country practice. The driver, 18-year-old Moran Biton, continued for several blocks before pulling over and telling police that she thought she had hit someone.

"We see the worst of the worst," Navarro said. "Everybody has to be so connected these days. What happened to just being in the car and listening to music?"

Nearly 31,000 fatal crashes were reported in the U.S. in 2009 in which more than 33,800 people died. About 16 percent of those fatalities involved a distracted driver, according to the U.S. Department of Transportation.

The actual percentage could be even higher, according to the Insurance Institute for Highway Safety, which pegs the number at 22 percent of all crashes.

"These estimates are imprecise and likely underestimate distraction's role in crashes, as many police reports don't have information on distracting events," according to the IIHS. "Police crash reports aren't a reliable way to count cellphone-related collisions because drivers often don't volunteer that they were on the phone."

Despite an estimated 60 to 70 percent compliance rate with the law, a recent national poll found that 63 percent of teens and young adults admitted using a cell phone while driving and 30 percent say they have sent text messages while driving.

"With the mobile-device use explosion, it's something that the traffic safety community has been running to catch up with," said Chris Cochran, spokesman for the state Office of Traffic Safety. "We won't be letting up from this point on."

So far, the Los Angeles County Sheriff's Department reported more than 700 tickets issued for distracted driving between April 1 and 17, a number "significantly higher than ever before," said spokesman Steve Whitmore.

LAPD numbers were unavailable, but officers in the San Fernando Valley issued nearly 300 tickets in six days alone, according to Officer Catalina Lopez.

And the increased vigilance would continue, officials vowed.

"Not only will we keep it up, but as we move on and it becomes easier to detect, I think you will see that these tickets will continue," Whitmore said.

A bill that would increase the fines for those caught using cellphones is currently being considered by the state Assembly.

SB 28, passed by the state Senate last week, would increase the cost of a first offense to at least $309, and subsequent violations would come with heavier fines and a point on DMV driving records.

Bicyclists are also included in the proposed law, although they would face lower fines and be spared a point on driving records.

A 20 percent reduction in fatalities and crashes was reported by the CHP in the first year after the hands-free law went into effect in July of 2008, according to Sen. Joe Simitian (D-Palo Alto), who authored SB 28 and the hands-free law.

"Every day in California, families will sit down to dinner with people who might not have made it through the day," Simitian said. "I think that's worth it."