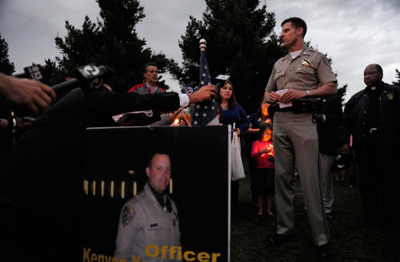 WALNUT CREEK -- A California Highway Patrol officer shot during a traffic stop along Interstate 680 in Alamo was pronounced dead Wednesday even as investigators continue to seek answers in the incident that led to his death.

Kenyon Youngstrom, a 37-year-old father of four from Cordelia, was pronounced dead at 6:05 p.m. at John Muir Medical Center in Walnut Creek, the CHP announced. He had been on life support there following the Tuesday morning shooting, when a man stopped for an obscured license plate pulled out a gun and shot him in the head.

"He was a kind person, a giving person, a family man with a great sense of humor," CHP Capt. Jonni Fenner said in announcing Youngstrom's death Wednesday night. "I also want to add that he loved his job, and he loved serving and believed in contributing."

Youngstrom died surrounded by family, which had kept a vigil at the hospital since the shooting. Youngstrom's family will donate his organs to eight recipients, officials said.

"The family remains strong, united and courageous," Fenner said. "They have to figure out how to without Kenyon, so we ask that their privacy be respected at this difficult time."

Authorities on Wednesday identified his killer as Christopher Boone Lacy, 36. Lacy, who lived in the small Northern California town of Corning, was shot and killed by another officer after Youngstrom was shot, Contra Costa Sheriff's spokesman Jimmy Lee said.

Youngstrom "died protecting the community he served, and we are grateful to him for that," Gov. Jerry Brown said in a statement. "We will always remember his courage commitment and service."

Youngstrom's name will be engraved upon the CHP Memorial Fountain in Sacramento, which honors all those who died in law enforcement service, CHP Commissioner Joe Farrow said in a statement.

"This is a very sad day for the CHP as well as for all Californians," Farrow said. "... On behalf of the men and women of the California Highway Patrol, I wish to thank all of those who have kept Officer Youngstrom, his family and friends in their thoughts and prayers."

The shooting happened on the southbound shoulder of I-680 near the Livorna Road offramp at 8:20 a.m. Tuesday. Youngstrom had pulled over to deal with a dead deer by the roadside and his partner, driving another patrol car, radioed that he was pulling Lacy over for having an obstructed license plate, Lee said.

Lacy pulled his green Jeep Wrangler to the side of the road behind Youngstrom's patrol car, with the second patrol car pulling up behind Lacy, Lee said.

Youngstrom approached the Jeep from the front and spoke to Lacy through the driver's side door for 30 to 45 seconds. Lacy -- "without warning" -- drew a handgun and shot Youngstrom in the head, Lee said. Youngstrom fell back into the highway and collapsed. The second officer, who approached the Jeep on the passenger side, shot Lacy several times, Lee said. Lacy died later at John Muir Medical Center.

Investigators found a handgun, two loaded gun clips and a knife in the Jeep, Lee said.

A motive for the shooting is unclear.

Investigators searched Lacy's Corning home Tuesday night, finding at least six computers and several disk drives, but no other weapons, Lee said. A tech team was continuing to pore over the computers Wednesday.

Kenyon Youngstrom at his CHP graduation in 2006.

Lacy "mostly keeps to himself and is something of a loner," Lee said.

Lacy's neighbors were stunned. Most said they saw him only when he was jogging or farming produce, which he sold online.

"He must have snapped," said neighbor Jim Bowron. "I don't have an answer for it. ... If you asked anyone up here, they all liked him."

Lacy was commuting to the Bay Area, and Bowron said he heard his Jeep leave at 5 a.m. Tuesday. Later that night, the CHP showed up at Lacy's home and started searching. That's when Bowron turned on the television and saw his neighbor's Jeep on the news.

"I didn't want to admit that he did this," Bowron said.

Lacy's parents live in Oregon, where Lacy grew up, and have been cooperating with investigators, Lee said.

His father, Craig Lacy, said in a brief phone interview with ABC7 that his son was smart but troubled by mental illness, describing him as bipolar but not violent. While in Bend, Ore., Lacy played in a band dubbed The Jiggawatts, putting out an alternative rock CD.

Lacy relocated to the Bay Area to attend San Francisco State University, where he earned a master's in computer science in 2005, according to the college. While there, he was president of the campus chapter of the Association for Computing Machinery.

A cached look at the software engineer's Spartan personal website offered little information, other than a hint at political leanings: "I also contribute significant time to the Ron Paul campaign ... and the liberty movement."

Lacy's online resume boasts extensive knowledge in several computer programming languages, and he had a string of contract jobs at nearly a dozen firms and organizations. The most notable was eBay, where from 2008 to 2009 he worked on the online giant's Web interface.

"I had a great time at eBay with some of the nicest, hardest-working, most talented programmers I've ever had the pleasure of working with," he wrote in 2009 on his blog, which mostly centered around computer coding. "Unfortunately, I couldn't get on board with the vision for the second phase of the eCloud project and asked to be let go. They were happy to oblige."

He also showcased a mock-up for a dating website interface on his blog.

Most of the firms Lacy claims to have worked for either had no quick way of verifying his employment or could not be contacted.

Public records show Lacy lived in Sausalito from 2004 to 2011 in a hillside duplex. A neighbor said he kept a low profile before moving a year ago. While living in Sausalito, Lacy was arrested on DUI charges and speeding in October 2006, but the DUI charge was dropped because of lack of evidence, according to the Marin County District Attorney's Office. He paid a fine for the speeding charge.

Last year, Lacy took out a $28,000 loan to buy a plot of land for $30,000 in the Rancho Tehama subdivision of Corning, an isolated mishmash of about 600 homes and trailers about 25 miles northwest of Chico, public records show. His gray trailer on Stagecoach Road, with a tended garden of sunflowers and vegetables surrounded by a red fence, was empty Wednesday when a reporter visited.

After buying the land Feb. 15, 2011, Lacy billed himself online as "Available for remote contract work from Northern California" to prospective employers. He volunteered for Freedom Engineering, an anti-authoritarian Web startup whose only discernible goal is to attract programmers who can help them "think up the best ideas for technology that helps people be more free."

CHP Sgt. Diana McDermott said Youngstrom was "a man of faith who is very close to his family."

John Caughman, a former neighbor of Youngstrom's, said the officer often played outside with his children in the Cordelia neighborhood where they lived until about a year ago.

"I just feel for his kids because he was all about his kids," Caughman said.

Youngstrom graduated from the academy in 2006 and worked in the Martinez office, having been assigned to the Contra Costa office immediately after graduation. From 1994 until 2002, Youngstrom was a U.S. Army reserve soldier.

The investigation into the shooting is being led by the Sheriff's office and District Attorney's Office, which is standard procedure for any officer-involved shooting in Contra Costa County.

Supporters will establish a memorial fund in Youngstrom's name. Information regarding a memorial service will be released in the coming days, the CHP said.