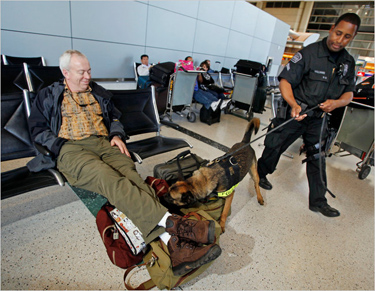 A police officer and a sniffer dog on Thursday at Los Angeles International Airport after a demonstraton of the dogs. (Reed Saxon/Associated Press)

In large and midsize cities across the country, police chiefs and domestic security officials say they have drastically increased counterterrorism operations under the assumption that a "lone wolf" or a small group of terrorists will try to strike on American soil to avenge the killing of Osama bin Laden.

Although there are no known specific or credible threats, many of the officials said they are convinced that operatives of Al Qaeda or sympathizers will be highly motivated in the weeks and months before the 10th anniversary of the Sept. 11 attacks, according to interviews with more than a dozen police chiefs and senior counterterrorism officials.

The officials said they were especially concerned that a terrorist plot would focus on a target perceived to be "soft," like a train station or a shopping mall.

"In the short term, we are facing more danger from lone wolf actors who will see Bin Laden's death as justification in their minds to mobilize and do something here," said Deputy Chief Michael Downing, head of the Counter-Terrorism and Special Operations Bureau in the Los Angeles Police Department.

In the past dozen days, several senior police officials said they had not seen so much frenetic counterterrorism action since the weeks after Sept. 11, 2001. The activities have included numerous briefings with F.B.I. and Homeland Security officials in Washington, as well as conference calls with joint terrorism task force members and local officials, some as often as twice a day.

"I personally think the chances of an attack are highly likely," said Boston's police commissioner, Edward Davis. "The terrorists have utilized Bin Laden's death to turn up the rhetoric on this extremism. I think simply due to the odds, something will happen somewhere in the United States. We have to be extremely vigilant."

There is something of a consensus that trying to prevent an attack by one person or several people poses a more complicated challenge than trying to stop a more elaborate - and perhaps easier to detect - plot involving a dozen or more participants.

President Obama echoed the concerns in an interview on Friday with WLTV, the Miami Spanish-language Univision affiliate, saying, "There is no doubt that when it comes to the American people that after having killed Bin Laden there may be a desire on some Al Qaeda members to exact revenge, and that's something that we have to be vigilant about, and we're monitoring all these situations."

As for the kind of terrorist plot they expect to see, most officials pointed to the arrests in New York City on Wednesday of two men who the authorities said had intended to carry out a grenade-and-guns attack against a synagogue in Manhattan.

Officials also mentioned their concern about the suicide bombing attack on Friday at a military training center in northwest Pakistan, which killed 82 people and wounded at least 150. Taliban leaders later said the attack was to avenge the killing of Bin Laden, though the Pakistani police said they doubted that claim.

Homeland Security and F.B.I. officials have told state and local police officials that the Bin Laden killing could lead to quicker timelines for gestating terrorist plots that had previously been intended to coincide with the Sept. 11 anniversary.

State and local police departments in most cities have increased the number and visibility of patrols, particularly at busy sites like airports, train stations, ports and ballparks. At N.B.A. playoff games in a handful of cities, including Los Angeles, Atlanta and Miami, the police have increased their presence at arenas.

"It is more likely something will happen here," said the Los Angeles police chief, Charlie Beck. "Do I think over all the world is safer? Yes. But you don't end the terrorism threat just by getting rid of Bin Laden."

In the writings and computer files seized from Bin Laden's hide-out in Abbottabad, Pakistan, American intelligence officials found evidence that the Qaeda chief was fixated on attacking the United States above all other global targets. He had urged Qaeda lieutenants to recruit non-Muslims "who are oppressed in the United States," including African-Americans and Hispanics, to help organize a spectacular attack timed to the 10th anniversary of the Sept. 11 attacks, officials said.

Several local police and counterterrorism officials said they were struck by intelligence that indicated midsize American cities were considered for attacks. A thwarted attempt to bomb an airliner bound for Detroit on Dec. 25, 2009, was traced to Al Qaeda in the Arabian Peninsula.

Intelligence reports have "mentioned they were looking at sites other than New York and Washington," said Philadelphia's police commissioner, Charles H. Ramsey, who is president of the Major Cities Chiefs Association.

"We are located between the two, and Philly would be one of those places they might consider," Commissioner Ramsey said. "We have to be very concerned about the lone wolf person who is acting out of their own personal reasons as opposed to something more organized."

Midsize cities, like Milwaukee, Austin, Tulsa and Miami, have also increased their counterterrorism efforts and preparedness, officials said. "It does not have to be a sophisticated terror plot to bring commerce to a halt," Police Chief Edward A. Flynn of Milwaukee said. "The challenge for us in terms of physical security is attaching our deployments to credible information."

Miami is on higher alert, said its police chief, Miguel A. Exposito, and its counterterrorism efforts have been aided by much more information-sharing among law enforcement agencies.

Several police chiefs said they were worried about "active shooter scenarios," like an attack on a place like a shopping mall by a lone gunman sympathetic to Al Qaeda. "Shopping malls could be targets, or mass transit, trains, buses - places that would be relatively easy to do with a high body count," said Commissioner Ramsey of Philadelphia.

On the Las Vegas Strip, where several of the Sept. 11 terrorists spent time in the weeks before the attacks, patrol officers have been added in the days since Bin Laden's death, Sheriff Douglas C. Gillespie of Clark County said.

Chuck Wexler, the executive director of the Police Executive Research Forum, said Bin Laden's death amounted to "a wake-up call" for police chiefs and state and local counterterrorism officials. "When you take out the No. 1 terrorist," Mr. Wexler said, "you need to go on offense and not defense. It doesn't take much to wreak havoc."

The increased counterterrorism activities and warnings to a skittish public have led to false alarms. During the morning rush after President Obama announced Bin Laden's death, a backpack left in a train station restroom in Riverside, Calif., led to an evacuation of passengers.

False alarms have occurred around the country, an inevitability when the public is encouraged to report suspicious activities.

"I think this is going to be the reality for the next few months," said Chief Beck in Los Angeles. "This is a similar period to just after 9/11 when we had a huge increase in reports of suspected terrorists. The public is paying attention."