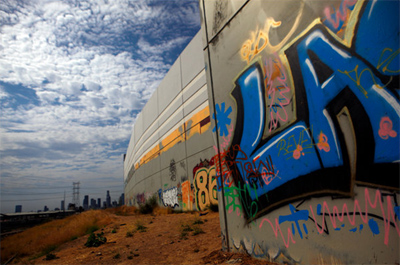 SANTA MONICA, Calif. - Fresh blotches of graffiti decorate the backs of street signs here near the ocean. Tags have popped up on guardrails along the dirt trails near Griffith Park across town. There are, almost daily, fresh splashes on walls in the San Fernando Valley, on downtown Los Angeles buildings and on billboards along the highways.

And Los Angeles does not appear to be alone in grappling with a recent upsurge in graffiti, which is turning up in some unlikely places. A bumper crop of scrawls is blossoming in many modest-size communities across the country - in places like Florence, Ala.; Bernalillo County, N.M.; Taylors, S.C.; and in larger cities like Nashville and Portland, Ore. - even as major cities like Chicago, Denver, New York and Seattle say vigilant antigraffiti campaigns have spared them thus far.

"It's popped up all of a sudden in the last six months," said Tim Sandrell, the owner of Safari Adventures in Hair in Florence. "I've been downtown for 10 years, and I'm really disappointed that we are seeing this kind of activity. We have a beautiful city and an historic city, and it's really upsetting to me seeing this going on."

The upturn has prompted concern among city officials and renewed a debate about whether glorifying such displays - be it in museum exhibits, tattoos or television advertisements - contributes to urban blight and economic decay. But it is also stirring a debate about what is causing this recent surge and whether it might be an early indicator that anxiety and alienation are growing in some struggling urban areas in the face of stubborn unemployment and the lingering effects of the recession. The latest statistics from Los Angeles, where the unemployment rate was 11 percent in May, attest to a widening problem: the city removed 35.4 million square feet of graffiti for the fiscal year that ended June 30, an 8.2 percent jump over last year, city officials said.

"We've seen the amount of graffiti go up yearly," said Paul Racs, the director of the Office of Community Beautification.

Tim Francis, a supervisor for the Blue Ridge Parkway in North Carolina, said there had been a rash of tagging on park signs, underpasses and the parkway. Rangers have set up surveillance, but the length of the highway in Mr. Francis's jurisdiction - 165 miles, stretching from Boone to Cherokee - and the furtiveness of the graffiti writers makes catching them daunting.

"We are seeing tagging anywhere and everywhere," Mr. Francis said. "Summertime, kids are out of school. Idle hands."

In Bernalillo County, which includes Albuquerque, graffiti complaints in June jumped to 300, from 84 in April.

"It just keeps coming up, little by little," said Bobby Velasco, the county's graffiti supervisor. "We've covered more this year so far than we did last year."

"We clean it up every week, and every week they always come back and put up 'Welcome to L.A.,' " he said.

In Portland, officials said taggers from other communities were defacing their property. "We're arresting more people from out of town," said Marcia Dennis, the city's graffiti abatement coordinator. "For every one we get cleaned up, something else takes its place."

The upsurge comes as cities like Los Angeles, struggling with budget cuts, have trimmed graffiti fighting programs; the $7.1 million budget for graffiti eradication last year was cut 6.5 percent in the budget that took effect July 1. But cities like Santa Monica have not cut back, and have still had an upsurge, suggesting other factors are at play.

Some officials, like Mr. Francis, say it is a symptom of summer recess, a tough economy that has left many teenagers out of work and a general sense of anxiety and malaise. "People know the cops aren't around or they are working on other stuff," said Bobby Shriver, a member of the Santa Monica City Council.

"It's because of the pop culture," said Ramona Findley, a Los Angeles police detective who heads the department's graffiti task force. "It's very interesting; with your violent crime going down, it seems like your mischievous crime is going up. The art world has accepted it. People make money from graffiti T-shirts. I was in Wal-Mart on Easter, and I saw graffiti Easter eggs."

Ms. Dennis, in Portland, described graffiti as "addictive behavior," adding: "The rush is addictive, and these guys don't quit. They all think they're going to end up being fabulously wealthy graffiti artists like Marc Ecko or Banksy or Shepard Fairey."

Several officials said they were concerned the graffiti had extended beyond gang markers to others who consider more of their community a canvas. "The areas where we've seen the biggest increase are areas where we haven't had a problem before," said Mr. Racs of the Los Angeles beautification office. "It's not gangs. It's primarily just taggers. They are just cruising around on their skateboards."

And the problem, he said, has become more national. "I get calls all the time from little cities in Iowa and Indiana that have never had a graffiti issue before," Mr. Racs said.

The surge has prompted new efforts to combat it, including a graffiti-recognition database in Los Angeles and a reinstitution of foot patrols in the Brooklyn neighborhood of Portland.

"We will have four or five people starting out once a week around dusk walking the neighborhood with a graffiti cleanup kit," said Michael O'Connor, the head of the Brooklyn Action Corps in Portland.

The rise in graffiti has stirred concern among officials who already feared budget cuts would threaten eradication efforts.