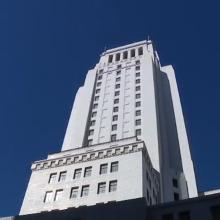 An LA city hall worker has been infected with typhus in an outbreak that has been plaguing downtown Los Angeles for months.

Typhus is typically spread by fleas that have been infected by rats, cats and opossums.

Fox 11 obtained a video from the Office of LA City Councilwoman Monica Rodriguez showing screaming staffers trying to catch a rat back in August 2018. It got away but staffers say they have seen many rodents.

In October 2018, health officials announced there was a typhus outbreak in LA County including in the downtown areas that included Skid Row where an estimated 2,000 homeless people sleep.

Typhus can cause high fever, chills, headache and rashes in people and can be treated with antibiotics. The California Department of Public Health says the disease cannot be transmitted person-to-person.

City officials say all of the carpets in City Hall and City Hall East may need to be ripped out due to the typhus outbreak.