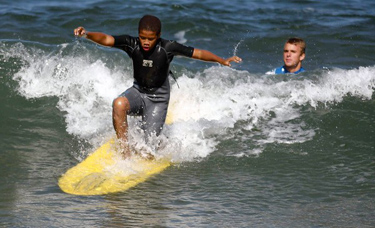 As morning broke over the city Monday, cops assigned to the Los Angeles Police Department's Southeast Division went about their normal routine, patrolling the streets. There was, as always, plenty to do. The division's 10-square-mile area has some of the highest crime and poverty rates in the city and is home to 120 documented gangs and three of the city's roughest housing projects.

But 18 miles and a world away, Officer Scott Burkett was working a very different beat. Having traded his uniform for a wetsuit, the 15-year LAPD veteran was in the water at Torrance Beach with about two dozen kids from the Watts-area neighborhood that Southeast patrols, teaching them to surf.

"It's about changing the relationship between the Watts community and the LAPD," said Southeast Capt. Phil Tingirides, a first-time surfer who got in the water Monday as well. "To do that, we've got to get the kids, and we've got to get them early."

In recent years, the violent crime rates in Southeast were too high to allow officers to work on anything but patrol, gang units and other traditional assignments, Tingirides said. But in 2009, after a few years of declines in crime, he asked Burkett to start a youth activities program.

"We got to the point where we felt we could move away from just violent crime suppression and make a move toward this sort of thing, which is about trying to impact the future instead of just throwing cops up against every crime that occurs."

It's not exactly revolutionary thinking: For years, police departments have been trying with varying success to implement so-called community-based policing strategies. But to try it in a place like Southeast, where distrust toward the police historically runs deep, and to commit to it so heavily - Tingirides said he has 13 officers working full time on several community-relations programs - speaks volumes.

Tingirides believes Burkett's Police Activities League, another program that focuses on at-risk children, and one for students interested becoming cops, are paying dividends. Since they started, juvenile arrests in the division have dropped about 40%, he said.

For his part, Burkett, 43, was ready for a change of pace when Tingirides approached. He had worked several assignments and spent most of his career patrolling the streets in Southeast. In 2008, he was awarded the department's highest honor, the Medal of Valor, for confronting a gunman who had shot a man with an assault rifle.

"For the most part, officers don't come on the job to work with kids. It's about hooking and booking," he says, using police jargon for making arrests. "But I had all that behind me. And this sounded like a really cool opportunity. Now that I'm in it, I see that it really does make a difference."

Working with three other Southeast officers, he has thrown himself fully into the program. Instead of waiting for kids to show up, officers went in search of the kids. They knocked on doors at area schools and persuaded principals to use the program as a reward for good grades and attendance.

Erin Craig, assistant principal at College Ready Academy High School No. 11, said the school has come to depend heavily on Burkett and the others, who are on campus several times a week. Ten of Craig's students were surfing on Monday.

"We try to keep the kids busy as much as possible," she said. "The more we can keep them off the streets, the less chance the gangs have of getting to them and corrupting them."

Each week, the officers coordinate three or four activities, Burkett said. There are frequent outings to Staples Center for Lakers, Clippers and Kings games, museum trips and other day trips. But, in an area where kids rarely venture far beyond their neighborhood, Burkett is also focused on giving kids experiences they otherwise wouldn't have. Along with the surfing, there have been kayaking outings, ski lessons at Big Bear and camping trips.

About 400 kids are involved in the program each year, Tingirides says.

Because the program is a nonprofit, Burkett leans on old friends, connections and a blunt "What are you going to do to help the kids?" approach to encourage people to donate the cash and resources needed for each outing.

For surf camp, he walked into the offices of water sports company Body Glove without an appointment and asked to speak with Russ Lesser, the company president.

"He told me what he wanted to do, and I said, 'How many wetsuits do you need?' " Lesser says. Burkett also turned to the YMCA chapter in Torrance, where he grew up. The organization provided some of the instructors and the surfboards.

After managing to get up on a board and ride his first ever wave, Johnathan Rodriguez, 14, stood shivering but smiling on the beach.

"It gives us something to look forward to," he said of the program.