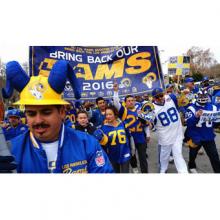 As the Rams prepare for their return to Los Angeles on Saturday with a preseason game against the Dallas Cowboys, L.A. city officials are scrambling to figure out who will pay for the substantial police presence required at a National Football League game.

In a letter sent Friday to Rams owner Stan Kroenke, four City Council members - including Council President Herb Wesson - demanded that the costs of policing inside and outside the stadium be "fully covered" by the sports franchise and that the Rams hire off-duty police officers as security rather than rely on standard Los Angeles Police Department patrols.

The council members' letter echoes arguments previously voiced by the union representing LAPD officers. Jerretta Sandoz, vice president of the Los Angeles Police Protective League, said the union has been fielding complaints from members reassigned from investigating cases to providing security on game days. The union asserts that 200 extra officers will be needed every time the team plays at the Coliseum, at an annual cost to the city of $2 million.

LAPD Capt. Andrew Neiman said on-duty officers would handle security outside the Coliseum for the Rams-Cowboys game Saturday, and directed questions about any potential reimbursement arrangements to the mayor's office. Neiman said the exhibition game would provide a valuable test run for police as they evaluate how rowdy crowds would get at Rams games.

"We don't know what the fan base is going to be like yet for the Rams," he said.

Carl Marziali, a spokesman for Mayor Eric Garcetti, said in an email that the details of who will pay for cops at football games are still being worked out. At present, he said, the Rams have agreed to fund security inside the Coliseum (as is common at other professional sports venues in the city) as well as traffic-control officers and other LAPD officers outside the stadium.

"The city and team management are discussing further cost sharing," he said.

Marziali said he was unable to provide further details about the number or cost of the officers the Rams are funding, and did not confirm or dispute the figures advanced by union officials. Garcetti returned to Los Angeles on Thursday from Rio de Janeiro, where he attended the Olympics.

A Rams spokesman did not immediately respond to requests for comment.