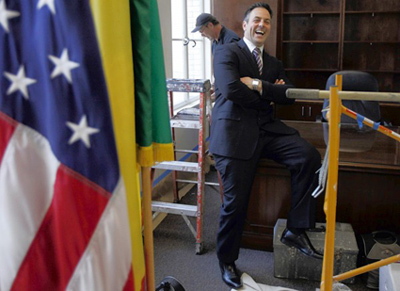 Officer Joe Buscaino visits the office he will use as a councilman. (Michael Robinson Chavez, Los Angeles Times / January 18, 2012)

When Police Officer Joe Buscaino is sworn onto the Los Angeles City Council in the coming weeks, he'll have plenty of cops for company.

Four of the lawmakers on the 15-member council will either be former police officers or current reserve officers.

Some say the proliferation of police inside City Hall makes sense because public safety is perhaps the city's preeminent responsibility. Others wonder whether the council, which has only one female member, accurately reflects the city.

Zine said he thinks officers are a natural fit for the council because of their problem-solving skills and familiarity with the community. He said he hopes Buscaino will help with efforts to restore some funding for the Police Department when lawmakers take up the city's budget - and try to close a $72-million deficit - this spring. In recent years, the Police Department has lost some of its civilian staff to cuts, which means that some sworn officers are now performing desk jobs instead of patrolling the streets.

Buscaino, who took a tour of his new City Hall office Wednesday - stopping for a moment to roll a few strokes of paint on the walls - said he is committed to reversing that and other cuts to police. He said the city attorney's office and the Department of Recreation and Parks are other important components of public safety, and said the city can find money to help bolster those departments by transferring some of its other services, like management of the Los Angeles Zoo and L.A./Ontario International Airport, to private operators.

Parks - one of the body's toughest budget hawks even when it comes to the LAPD - would probably oppose new funding for police.

About 70% of the city's general fund goes to the Police and Fire Departments each year - a share that some say is outsized. Manuel Criollo of the Bus Riders Union said the city should invest more in parks, after-school programs and infrastructure improvements and spend less time enforcing laws that "criminalize the poor."

Civil rights attorney Cynthia Anderson-Barker, a board member of the National Lawyers Guild's National Police Accountability Project, said she worries that with four police-affiliated members on the council, there will be "no effective checks and balances on the power of the police lobby."

She was referring to the Los Angeles Police Protective League, the union representing about 9,800 rank-and-file police officers. The union is a major force at City Hall, down to the coffee machine it donated for the council chambers.

In recent months, the union spent $223,000 to help Buscaino in his successful race against Assemblyman Warren Furutani, a longtime Democratic politician who lost despite having better name recognition as well as backing from the Los Angeles County Federation of Labor and Mayor Antonio Villaraigosa.

Since 2009, the police union has spent nearly $1.7 million in other Los Angeles elections, including $746,000 to help elect City Atty. Carmen Trutanich.

Tyler Izen, the union's president, said his group puts money into races to ensure that public safety is a part of the conversation.

Last year, the group launched a campaign with yard signs that say "Public Safety First," in three council districts with upcoming elections. In a newsletter to members, former union President Paul Weber said they are meant to remind elected officials of the union's "strong and ongoing commitment to fighting any political maneuvers that might undermine public safety."

The union has played a role in one of the biggest issues to hit City Hall this year - a new policy supported by Chief Charlie Beck and Villaraigosa that would allow unlicensed drivers to avoid having their cars impounded for up to 30 days. Beck has said the proposed changes are designed to ease what he sees as an unfair burden that the impounds place on illegal immigrants, who cannot get driver's licenses in California. But the union opposes it.

The Public Safety Committee, headed by Englander, heard a motion on the proposal last week that asked for the plans to be halted until the city can examine the potential effect of the policy change. Englander said his seven years as a reserve officer have given him unique insight into the proposal, which he says has not been properly vetted. His police experience often informs his decision-making on the council, he said.

"There's not only that institutional knowledge, there's that on-the-street knowledge," Englander said.