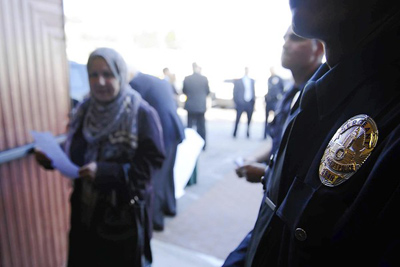 On a sunny afternoon this summer, dozens of Los Angeles police officers converged on the Iman Cultural Center and mosque in West Los Angeles.

They brought bureaucratic swag - pens and mugs emblazoned with the LAPD insignia - and then, accompanied by a smiling Chief Charlie Beck, crowded into a banquet hall in a blue swarm of friendly handshakes and words of welcome and fellowship.

When it was his turn at the microphone, Deputy Chief Michael Downing added another point: that the LAPD values its relationship with Muslim communities and wants people to continue to reach out if they suspect someone they know is becoming radicalized.

The event was a sign of how terrorism concerns have reshaped local policing in the decade since 9/11.

From the New York Police Department to small rural sheriff's departments, agencies have added counter-terrorism to their traditional crime-fighting duties - a shift that has cost billions of dollars and changed not just the equipment police use, but the way they approach law enforcement.

Police officers now monitor extremist chat rooms, study the tactics and weaponry of the Taliban and Iraqi insurgents, and travel to Muslim countries to develop their own intelligence.

The NYPD has more than 1,000 officers engaged in counter-terrorism, including a dozen based overseas. It recruits foreign-born New Yorkers and trains them in secret for undercover work.

In Los Angeles, 700 police officers work in the LAPD's Counter-Terrorism and Special Operations Bureau, including some who speak Urdu and Arabic. That's more than twice as many officers as are assigned to any police station in the city, even those in the highest-crime areas.

Local police also team up with federal authorities at 72 "fusion centers" around the country, where experts from an alphabet soup of agencies work in adjoining cubicles to analyze "suspicious activity reports." They look for unusual trends, unexpected behaviors and other potential clues that deserve further investigation.

"I would sum it up in one quick sentence, and that is: Traditionally law enforcement has not had any direct responsibility for national security, and now we do," said Michael Grossman, chief of the homeland security division at the Los Angeles County Sheriff's Department. "And that changes a lot ... of what we do."

Local police have helped uncover or foil alleged terrorist plots in several cities, from Torrance, Calif., to Seattle, and no large-scale attack has succeeded anywhere in the United States. But it's a matter of debate whether that is because of smarter policing, an alert public or blind luck.

Police quickly found the Pakistani-born man who tried to detonate a massive car bomb in Times Square in May 2010. But it was a street vendor who first reported smoke pouring from a parked car; the bomb had been ignited but failed to explode. (NYPD officials said they thought the bomb may have faltered in part because they do such a good job of flagging explosives sales in the region, causing the bomber to resort to less effective explosives.)

New York police conduct random bag inspections in the subways to search for bombs or weapons. Has it stopped any terrorists?

"Who knows? We may have deterred people," said Paul Browne, deputy commissioner of the New York Police Department.

The evidence appeared clearer this summer in Killeen, Texas, which is adjacent to the Ft. Hood military base. On July 27, police in Killeen arrested Pfc. Naser Jason Abdo, who was absent without leave from another Army base, on charges that he was planning to bomb fellow soldiers.

The tip came from Greg Ebert, a retired cop working at the nearby Guns Galore shop, who got an "uncomfortable feeling" when Abdo showed up in a taxi for a shopping spree that included three boxes of ammunition.

Army psychiatrist Maj. Nidal Malik Hasan purchased a semiautomatic pistol at the same shop and is accused of using it to kill 13 people and wound 29 others at Ft. Hood on Nov. 5, 2009.

Ebert said he grew suspicious when Abdo bought canisters of smokeless gunpowder but didn't seem to know what they were.

Local police and the FBI responded quickly. After conducting surveillance, authorities raided Abdo's motel room and found what they described as a trove of bomb-making materials. He was immediately arrested.

In addition to fighting attacks, police are working to improve relationships.

At the LAPD, one face of Muslim outreach is Officer Chand Syed, 26, a Saudi-born UC Irvine graduate of Pakistani descent who speaks Urdu, Hindi and Punjabi. After a chance meeting at a wedding, Downing plucked Syed from his job patrolling the North Hollywood Division and installed him at a desk in the counter-terrorism office on the 10th floor of LAPD headquarters.

Despite the gun holstered at his hip, Syed's daily activities sound like a textbook description of community organizing. He buzzes all over Southern California meeting with representatives from Muslim communities. One group wants help negotiating parking for Friday prayers. Another wants help putting together an art exhibit. Yet another wants advice on how to donate money to Islamic charities without running afoul of the law.

Some officials have expressed concern about the new counter-terrorism focus, particularly about aspects of the training that tens of thousands of law enforcement officials have undergone.

The LAPD's Downing, head of the department's counter-terrorism operations, said that some police departments have paid for courses that peddle rumors and misinformation, including false claims that American Muslims want to impose sharia, or strict Islamic law, in the United States.

Some departments "just hire the guy that has the sexiest, most heroic story to teach their cops," he said. "... It's just a travesty."

Other officials worry that traditional policing has suffered in the push to guard against attacks involving biological agents, massive explosions or other unlikely events.

"Something is lost," said Pasadena Mayor Bill Bogaard. "The priority or the emphasis goes toward events that are possible, but may be less likely than other public safety [issues] such as gang activity or community policing."

In the Los Angeles area, the daily grind of counter-terrorism takes place behind a locked door above a Bally Total Fitness gym in Norwalk. It is the Joint Regional Intelligence Center, one of the fusion centers created to overcome the bureaucratic "silos" that had sometimes kept local, state and federal agencies from sharing critical information.

FBI officials refused to discuss many specific cases, but LAPD officials pointed to 2009 case in which a Pakistani-born woman pleaded guilty to federal identity theft charges in a case involving selling fake driver's licenses. Names of some of the woman's alleged customers had surfaced in other national security operations, LAPD officials said.

"We have no idea how many thousands of people might be out there with these documents," LAPD Det. Mark Severino, who helped run the investigation, said at the time. "If we're talking about counter-terrorism issues, that's a scary thought. How do you track a man with a valid license and the name Rios?"

Last year, the Los Angeles fusion center received more than 2,300 reports, FBI officials said, many of them false alarms. The terrorism liaison in Escondido, north of San Diego, called federal agents earlier this summer, for example, after someone showed up at City Hall and began asking questions about the city's water system.

He turned out to be an enthusiastic water-system parts salesman, not a terrorist.

Fusion centers in Texas and Missouri have been criticized for urging police to monitor nonviolent political and religious activists. In 2009, the American Civil Liberties Union decried a threat assessment from a Virginia fusion center warning that historically black colleges could be hubs for terrorist recruitment.

"This superstructure has been built, the authority has been granted ... but there is no evidence that any of that is actually making anybody safer," said Michael German, a former FBI agent now at the ACLU in Washington. He warned that the centers could be "a breeding ground for overzealous police intelligence activities."