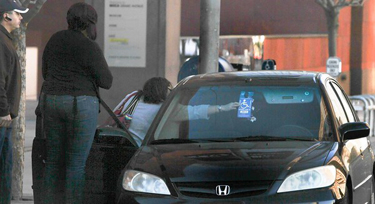 Officers with LADOT determine that a motorist using a disabled-driver placard to park free on a downtown Los Angeles street was not eligile to use the card. Officers confiscated the placard, and the driver will owe a hefty fine. (Mark Boster / Los Angeles Times / February 10, 2012)

As the scoundrels arrived to look for parking, little did the unsuspecting offenders of decency know that an undercover sting had been set up to ruin their day.

I'd written two columns on the fraudulent use of disabled-driver placards in downtown Los Angeles, and the city's Department of Transportation was swooping in for a crackdown. My only regret was that department chief Jaime de la Vega claimed he had other things to do, so there went my chance of riding shotgun with him in his Hummer.

We gathered at 6:30 a.m. Friday. My fellow crime busters included DOT officials and undercover officers and Councilman Dennis Zine, who had arranged for an LAPD unit to join the operation. Zine, a former cop who's running for city controller, was eager to bust anyone who'd fake a disability to park free all day, robbing the city of badly needed revenue.

On Friday, the action was light at 4th and Hill streets. Having run my own stakeouts, I recommended that we move the operation to Grand Avenue between 2nd and 4th streets, and let me tell you something: I ought to be in line for a consulting contract. It was easy pickings up there.

Two undercover cops from DOT worked the street while Zine and I, along with the DOT suits, held back. We tried to look inconspicuous, but with Zine, it's like you're out there with Kojak, and the red jacket he was wearing wasn't exactly camouflage. Fortunately, even Barney Fife could have handled this job.

Right around 8 a.m., a woman in a black Honda Civic pulled into a metered space on the east side of Grand, near the Museum of Contemporary Art, and hung a blue placard. You never know for sure who's cheating, because not all disabilities are obvious. But when DOT sergeants Manny Garcia and Jessie Dyar ran a check, they learned that the placard was issued to someone other than the driver.

"It's my aunt's," the driver told me, claiming she had dropped her off at court.

It's OK to use a disabled person's placard to drop off or pick up that person and park within "reasonable proximity."

But was this driver parking for the day to go to work?

I asked how she could defend taking a space that someone on crutches, or in a wheelchair, might need. She looked past me as if I wasn't there. But she can't look past the $353 citation written by LADOT for parking the vehicle illegally, and another one written by the LAPD officers for using a placard issued to someone else. The latter fine starts at $250 and could go as high as $1,000. A judge has the option of tacking on six months in jail. An LADOT officer also confiscated her placard.

But before the ink was dry on the citations, another bust had begun across the street.

Two women had parked at consecutive meters and hung placards. They were both walking fine, no apparent disabilities. The first woman had a placard that had been issued to her, so she was in the clear legally, if not necessarily ethically. The second woman, driving a brand-new black Camaro, claimed she and her sister each have placards, and she happened to be in a car with her sister's placard.

Sgt. Dyar ran a check and said there was no record of the driver having any placard issued to her. DOT confiscated the placard and wrote her a $353 citation, and LAPD senior lead officers Karen Owens and Mike Fernandez wrote her the ticket with the $250-$1,000 fine.

The cited drivers looked more indignant than remorseful. Zine said they looked like "they'd been caught with their hand in the cookie jar." He said he plans to introduce a City Council motion calling for the city's legislative committee to explore ways to crack down on this kind of nonsense.

State legislation would be required to allow California cities to establish their own rules on placards. In other states, some cities have begun charging disabled drivers for parking at meters, thereby discouraging fraud. And it seems at least a no-brainer to hold someone with a placard to the same time constraints as any other person parking. Zine said he would consider all these things, especially if they could mean more spaces for the truly disabled. LADOT spokesman Bruce Gillman said that in Washington, D.C., disabled drivers have to pay at designated meters but can park for double the time as the non-disabled.

We could have filled a paddy wagon on Grand, but we moved to the 600 block of Hill Street, where the DOT had fielded a complaint about a serial placard abuser who ties up spaces that could be used by shoppers.

Just after 9 a.m., a guy in a big black Mercedes pulled into a metered space near the St. Vincent Jewelry Center. He looked around cautiously before placing a disabled placard on his dash. The coppers nailed him when he stepped onto the sidewalk, insisting it was his wife's placard.

He told me this was "the first time" he'd ever used it himself.

Do I look that stupid?

As the tickets were written, he sulked around with a "how dare you" look, as if we were the bad guys. Twice, he came over and stood 12 inches away from me, as if we were in a stare-down.

No, I told him. I'm sad there are people like him in the world.

And I left him with something to think about: