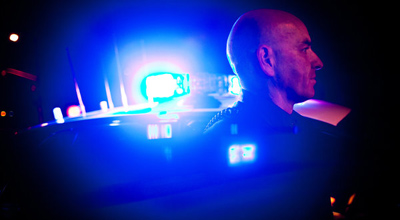 Officer Darrald Bryan, who had worked his way up to an investigative job in the robbery unit, was sent back to patrol last year along with 24 other detectives, a demotion that involved a pay cut of 5 percent. (Max Whittaker for The New York Times)

But each year brought more bad news for this city's Police Department. In 2011, faced with the biggest budget cuts yet - $12.2 million - Chief Rick Braziel was forced to take drastic action: he laid off sworn officers and civilian employees; eliminated the vice, narcotics, financial crimes and undercover gang squads, sending many detectives back to patrol; and thinned the auto theft, forensics and canine units. Police officers no longer responded to burglaries, misdemeanors or minor traffic accidents.

Earlier this year, the traffic enforcement unit was disbanded. The department now conducts follow-up investigations for only the most serious crimes, like homicide and sexual assault.

"You reach the point where there is nothing left to cut," Chief Braziel said.

The shrinking of Sacramento's police force has been extreme; the department has lost more than 300 sworn officers and civilian staff members and more than 30 percent of its budget since 2008. But at a time when many cities are curtailing essential services like policing - the Los Angeles Police Department said last week that it could lay off 160 civilian employees by Jan. 1 - the cutbacks in this sprawling city of 472,000 offer a window on the potential consequences of such economizing measures, criminal justice experts say.

"Sacramento may be a good city to watch in terms of what we can predict for the future," said Chuck Wexler, the executive director of the Police Executive Research Forum.

Noting that crime rates have plummeted across the country in the last two decades, Mr. Wexler said, "You could argue that the police have been doing something right." But with budgets being cut, he continued, "police chiefs are caught between saying, 'Look what we have done,' and having to rethink the strategies that have been successful."

Chief Braziel said he had tried to make the cuts strategically, making sure that the public's highest priority - having a police officer respond in a timely fashion when a 911 call comes in - is met and preserving a focus on violent crimes. ("There's no law that says you have to investigate homicides, but you don't just stop investigating homicides," he said.) Detectives serve on regional task forces led by the F.B.I. that focus on gangs and trafficking. To help morale, Chief Braziel has also offered short-term rotations to patrol officers, providing some variety now that their chances for promotion are severely limited.

"I could cry all day long about the budget cuts and the 30 percent and the loss of people and everything else," Chief Braziel said. "But it doesn't do any good because you get dealt a hand of cards with a budget crisis and you're playing stud poker - you can't give back the cards and say deal me two or three more."

"You've got to figure out within the new rules of the game how to do it better," he said.

But he is not blind to the effects of paring down a police force to its core.

In 2011, Chief Braziel said, the cuts, in his opinion, went past the tipping point. While homicides have remained steady, shootings - a more reliable indicator of gun violence - are up 48 percent this year. Rapes, robberies, aggravated assaults, burglaries and vehicle thefts have also increased, though in smaller increments.

Complicating matters, the cutbacks have coincided with a flow of convicted offenders back into the city as California, heeding a Supreme Court ruling, has reduced its prison population. Once released, former inmates have less supervision - the county's probation department also suffered cuts.

Chief Braziel, an optimist by nature, said the reductions have in fact had some benefits - more experienced officers on street patrols, for example. But the gaps are increasingly evident.

When a patrol officer stopped a car a few weeks ago and found the driver in possession of half a pound of recently cooked methamphetamine, worth $20,000 on the street, there was no one to spend the 10 hours it would take to write up and execute a search warrant for the man's residence, despite the suspicion that a meth laboratory would be found there.

"It's frustrating," said the officer, Darrald Bryan, who had worked his way up to an investigative job in the robbery unit but was sent back to patrol last year along with 24 other detectives, a demotion that involved a 5 percent pay cut, a switch to the graveyard shift in order to keep his weekends off and the loss of his take-home car.

"You just don't have the manpower," said Officer Bryan, adding that the best he could do was arrest the man for possession and sale of narcotics. Now that the gang squad is gone, patrol officers take turns in 90-day assignments that focus on gang activity. But undercover work is a thing of the past, and a highly successful program called Ceasefire, intended to reduce gang violence, was halted for lack of money, staffing and community resources.

Sacramento has consistently ranked at the top for traffic accidents among cities of similar size in California. But with the demise of the traffic enforcement unit, citations are down, volunteers have to be called in for large-scale events like races and parades, and efforts to analyze the city's most collision-prone intersections and address their hazards have been abandoned.

Teams of police officers - known as problem-oriented policing teams - once worked the city's troubled neighborhoods, following up with residents, landlords and government offices to solve problems identified on patrol. But those teams, too, were a casualty of the 2011 cuts.

"Would I rather be a drug dealer, a speeder or, if I was involved in the prostitution trade, would I rather be involved in that today as opposed to four years ago? Absolutely," said Lt. Justin Eklund of the major crimes section. "The issue comes down to, 'If we have X amount of bodies, what are we going to do?' "

Not every attempt to prioritize has worked out as planned. Burglaries had been dropped from the list of crimes that officers responded to. But that policy has now been reversed, after patrol officers heard complaints and residents resisted filing the online reports that were intended as a substitute.

For many residents, said Deputy Chief Dana Matthes, "the one time in their life they have to call the police is because their house is burglarized, and we tell them: 'Oh, report that online. We can't come out.' It doesn't send that customer service message that we're there for them."

A local sales tax measure on the ballot in Tuesday's election could restore some financing for the Police Department and other essential services in Sacramento. But Chief Braziel said the budget crisis had forced the department to re-examine how it is organized and what its priorities should be. Even when the economy relents, he said, some things may be done differently. "You've got to have a business model," he said. "The world's changing, and you've got to change. You've got to get out in front of it."

Bernard K. Melekian, the director of the Department of Justice's Office of Community Oriented Policing Services, said a similar rethinking was taking place across the country as departments coped with dwindling budgets. Many are consolidating services or merging with other agencies to form regional law enforcement authorities - in November, Camden, N.J., will close its department, terminating 273 officers and ceding control to a county police force.

The result, Mr. Melekian said, will be significant shifts in how policing is practiced. Whether the outcome will be simply an increase in efficiency or an increase in crime is anyone's guess.

"That's the big question that everybody is looking at," he said.