Skip to main content
12
Nov 2015
Customs and Border Protection rules out body cameras for officers, at least for now 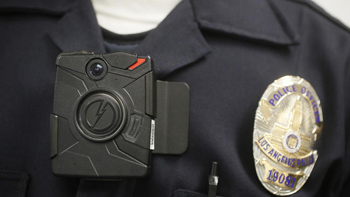 The U.S. Customs and Border Protection has decided against requiring its officers to wear body cameras, upsetting critics who say the technology is needed to hold the nation's largest law enforcement agency accountable.

Commissioner R. Gil Kerlikowske, who based his decision on a yearlong internal study, said officers would wear body cameras during training, and he released a plan to examine the devices for more widespread use in the future. However, "a full-scale deployment on every person is not necessary."

That's not enough for Jacinta Ma, director of policy and advocacy at the National Immigration Forum, which issued its own report last week calling for the immediate use of the cameras.

"The benefits of body-worn cameras are clear. As the largest federal law enforcement agency in the country, CBP must move with greater urgency to implement them because the agency impacts so many lives," Ma said Thursday. "The process needs to move much more quickly."

Angelica Salas, executive director of the Coalition for Humane Immigrant Rights of Los Angeles, called Thursday's announcement "a tiny step in the right direction" and urged the White House to "demand CBP implement a 21st century system of checks and balances, including body-worn cameras for all staff. Delaying implementation could be fatal to immigrants and officers alike."

In Texas, the epicenter of an influx of unaccompanied child migrants and families in recent years, civil rights advocates also said the cameras are needed now.

"If CBP was as serious as it says it is about transparency and accountability, the agency would prioritize the deployment of body-worn cameras to all its field personnel immediately," said Terri Burke, executive director of the ACLU of Texas. "We can no longer afford to accommodate CBP's stalling tactics."

Kerlikowske said the cameras the agency tested failed to withstand agents' rugged working conditions. Cameras worn as glasses by urban police "won't work for Border Patrol in the brush," he said, while cameras worn on agents' uniforms lasted a few months before they "became gummed up with dirt."

"I have not found a law enforcement agency that works in quite the environment that we do," said Kerlikowske, noting that he became a fan of body cameras as Seattle's police chief.

"We did not find technology that was that suitable for that length of time," he said. "We have to address many practical and privacy questions, as well as cost."

Officials said a wide-scale deployment of the cameras would cost tens of millions of dollars.

Kerlikowske emphasized that in the future he hoped to widely use the cameras.

"We saw many positive aspects of cameras," he said.

For the study, officials tested cameras at training centers and by providing them to 90 agents and officers across the country to use on the job, from Washington to New Mexico, Florida and Texas. But the benefits were outweighed by drawbacks, including cost, damage to morale, and vulnerability to hacking and to the elements, the study found.

"Most were not designed to meet the rigors required by CBP officers and agents," the report concluded, noting that the cameras "provide limited effectiveness, and for the most part are not suited for CBP operational use."

Customs and Border Protection employs about 60,000 people, including 21,000 agents on the southern border and 24,000 officers at ports of entry. They already use fixed and mobile cameras: 7,500 on southern and northern border ports of entry and 1,200 in between. But body cameras would allow them a closer view of staff, especially in the field where use-of-force incidents so often occur.

President Obama supports the use of body cameras by police. His administration has pledged millions of dollars to local departments that have adopted them, particularly after violent street protests in Ferguson, Mo., last year and other high-profile clashes that have raised questions about racial profiling and police use of force.

Violent incidents along the border remain a significant problem. Assaults on agents are reported daily - 390 so far in 2015, up 5% from the 373 assaults recorded in all of 2014. Three people have been killed in altercations with Border Patrol agents along U.S. borders this year.

James Lopez, a retired Los Angeles County Sheriff's Department patrol division chief who was among the authors of the National Immigration Forum report, acknowledged that a body camera "is not a magic pill - it will not eliminate all the questions and concerns about an incident," but he said "it will help you evaluate the use of force: Was it justified, was it within the law?" He called cameras "the best tool we have to maintain the public trust."

Officials with the National Border Patrol Council, the agents' union, are worried about even limited use of the cameras. They cite the cost, given recent wrangling about overtime pay, agents' privacy, time required to process and secure video and the potential for it to be used to discipline or force them from their jobs.

Shawn Moran, a San Diego-based spokesman for the union, said of the internal study, "Some of the concerns that were raised are some of the same concerns we had, yet CBP seems bound and determined to move forward" with the body cameras.

"It's going to come down to policy," he said. "A good policy will make or break how useful these cameras are, once they overcome the hurdles of the technology."