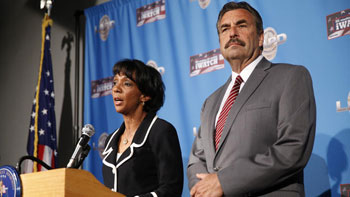 In the months leading up to her bid for reelection, Los Angeles County Dist. Atty. Jackie Lacey - like prosecutors across the country - has faced pressure to file charges in several high-profile police shootings and use-of-force cases.

The chief went public when he told The Times that he believed that criminal charges should be pursued against LAPD Officer Clifford Proctor in the May killing of Brendon Glenn, an unarmed homeless man shot in Venice. Beck said investigators concluded that Glenn was on his stomach when the officer fatally shot him in the back.See the most-read stories this hour >>

The chief's announcement shifted attention to the district attorney's office, which hasn't charged a law enforcement officer for an on-duty shooting in 15 years.

An attorney for Glenn's family said his clients were grateful for the chief's public stance, adding that he believed it would now be "political suicide" if Lacey decided not to charge the officer.

A group of activists gathered in Jefferson Park on Monday to urge quick action from Lacey.

Ali and others have criticized Lacey's decision last month not to file charges against a California Highway Patrol officer captured on video punching a woman on the side of the 10 Freeway.

Ali also led a small protest against Lacey outside the district attorney's office last fall, saying she was not being aggressive enough in prosecuting officers who use force. He and other civil rights leaders at the time called for Lacey's resignation and chanted "Jackie ... out, justice in." Ali was handcuffed and cited for failure to comply with an officer after sitting down in a roadway and refusing to move.

While it's uncommon for law enforcement officers to face charges for on-the-job actions, the district attorney's office last year successfully prosecuted an LAPD officer captured on camera threatening and kicking a woman who died in police custody.

Officer Mary O'Callaghan was convicted of assault under color of authority and sentenced to several months in jail. Another officer charged with assault, Jonathan Lai, was acquitted at trial.

Lacey, who is nearing the end of her first four-year term, is running for reelection on June 7. So far, no one has filed formal papers to run against her, a county registrar's spokesman said. The deadline for filing to run is March 11.

Lacey released a statement this week saying that "it is my ethical obligation to remain impartial until a thorough and independent investigation is completed by my office" into Glenn's killing.

"Decisions on whether or not to file criminal charges will be based solely on the facts and the law - not on emotion, anger or external pressure," her statement said.

Asked whether Beck's decision to make a public recommendation would help or hurt Lacey's process of deciding whether to file charges, a spokeswoman for the district attorney's office said there was no further comment.

The D.A.'s legal policy manual, which explains the basic criteria for filing charges, warns prosecutors against basing their decisions on "the mere request to charge by a police agency, private citizen or public official."

Beck's public announcement has also drawn criticism from some who say he should have kept quiet while Lacey's office is considering charges against Proctor.

Proctor's lawyer called the announcement a "political decision," saying Beck spoke too early last year when he publicly questioned the officer's actions just hours after the shooting and was "following suit" in his recommendation to the district attorney.

Craig Lally, the president of the union that represents rank-and-file LAPD officers, said the district attorney should be able to work without "outside interference."

On Tuesday, Beck defended his decision to go public with his recommendation, telling reporters that he felt it was his obligation as chief to not only defend officers when necessary but also "call it as I see it" if those officers overstep department or legal standards. The public, he said, needed to see the city's police chief "as a credible judge of these incidents."

"When I see something that does not meet the standards of what I expect for this organization, nor the standards for the state of California criminally, then I have to say something," he said.