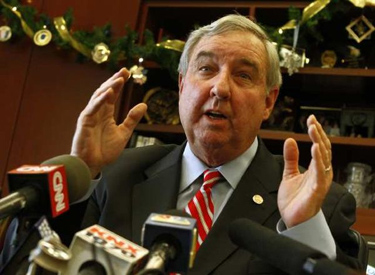 Los Angeles County Dist. Atty. Steve Cooley said a new state law to force counties, instead of the state, to jail non-violent felons is a "horribly flawed plan" that would increase crime on the streets.

"Public safety will be seriously jeopardized," Cooley said Tuesday. "We're not kidding. There will be tens of thousands of people let out all over California, who would otherwise be incarcerated.... I've been predicting ... that there will be a spike in crime.

"The state Legislature is abandoning their highest-priority core mission in terms of public safety, shifting it to the counties. And it is a bait and switch. They had a big fiscal problem, so they're abandoning a core mission and the county's going to pick up the pieces, and the public is going to pay the price," Cooley told reporters outside the L.A. County Hall of Administration.

Cooley said there's not enough room in the county jails to house felons who would otherwise go to state prison. Already, county jails are being forced to release their own inmates early.

Officials estimate that in Los Angeles County, about 7,500 non-serious, non-sexual and non-violent felons who would have gone to state prison will instead stay in county custody.

Cooley's comments come as the county Board of Supervisors is finalizing plans on how to handle the state felons in the county system. The state law will go into effect Oct. 1.

A couple of supervisors cited some minor problems in the plan, and requested that a countywide committee, led by Probation chief Donald Blevins, resolve them and return it to the supervisors for final approval.

Sheriff Lee Baca, however, told reporters he didn't know if the state's plan would lead to an increase in crime.

"That is an unpredictable reality. We don't know. There's a lot of reasons to believe it could go up. But there's also a need for us to be cautious about that point of view and weigh it against how effective law enforcement can be integrated into this plan," Baca said.

The biggest challenge, Baca said, would be the felons, who will stay in county custody instead of going to state prison, beginning Oct. 1.

"The buildup of that population is going to be the challenging part," Baca said.

Supervisors, meanwhile, fretted that Sacramento would renege on promises in future fiscal years to continue funding the counties for their oversight of state prisoners. "This is a state responsibility that has been dumped on counties," said Supervisor Zev Yaroslavsky. "Now we're left holding the bag."

"Common sense tells you that the sheriff doesn't have the jail capacity to house all of these folks that are going to have to be housed as inmates," Yaroslavsky said.

"You're going to have to kick some ... people out the door."