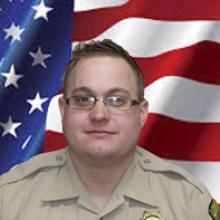 A 31-year-old sheriff's deputy in Northern California was fatally shot Wednesday while responding to a disturbance call, and the suspected gunman was taken into custody, authorities said.

Modoc County Sheriff's Deputy Jack Hopkins responded to a reported assault or disturbance about 10:30 a.m. in a rural area 10 miles south of Alturas, according to a statement from the sheriff's office.

While responding, Hopkins - a sworn sheriff's deputy since 2015 - was gunned down.

It's unclear what led to the shooting, which prompted a massive response from state and federal law enforcement, including officers from the California Highway Patrol and U.S. Forest Service. The shooting is under investigation by the CHP as well as authorities from neighboring counties' sheriff's offices.

By 11 a.m., a suspect was taken into custody. The suspect's identity was not released.

Hopkins was survived by extended family and co-workers, and the sheriff's office said the deputy's slaying resulted in an "outpouring of support and generosity."

Late Wednesday, law enforcement patrol cars had a procession in tribute to Hopkins, and a video of the caravan was posted on the department's Facebook page. 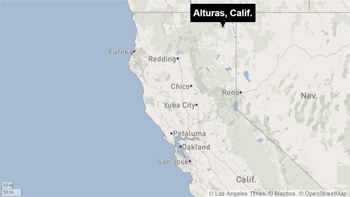 Shortly after news of Hopkins' death spread, the Alturas Municipal Airport wrote on Facebook that he had been recently transferred from the Alturas Police Department to the sheriff's office.

The shooting was at least the fourth slaying of a law enforcement officer in California in two weeks.

"He was probably the nicest man," the airport wrote. "When he pulled you over for a headlight, or something you did, he always was courteous and had a smile on his face. He didn't have a mean bone in his body, just a great guy. He is missed by all of us."

The shooting was at least the fourth slaying of a law enforcement officer in California in two weeks.

On Oct. 6, Los Angeles County Sheriff's Sgt. Steve Owen was fatally shot as he responded to a burglary report.

Trenton Trevon Lovell, 27, was charged with murdering Owen, attempted murder of a second sheriff's deputy, being a felon in possession of a firearm, and two counts each of residential robbery and false imprisonment.

Riverside County Dist. Atty. Mike Hestrin said John Hernandez Felix, 26, was "prepared" for the Oct. 8 attack and set up a trap. Felix ambushed the officers as they stood outside his door, Hestrin said.