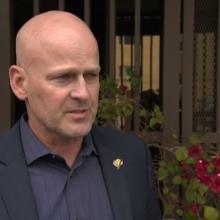 Three Los Angeles Police Department officers have been infected with a highly contagious staph infection after what a union official says was an encounter with a homeless person at a police station. The three officers who were infected are on medical leave pending treatment and testing. All are expected to make a full recovery. Steve Gordon of the L.A. Police Protective League confirmed to CBSLA that it was a homeless transient who came into contact with officers at the station. Gordon was blunt when asked about the problems officers face when dealing with the homeless population. “Our officers are being put in very hazardous conditions, with the addiction to drugs, the homeless encampments, the feces, the needles, everything throughout these encampments,” said Gordon.