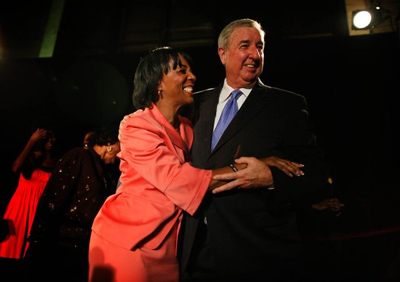 "Ms. Lacey ran a dignified campaign and has earned our respect,'' Jackson said in a statement. "While she and I have serious disagreements, we share a commitment to making Los Angeles County a safer place to live. I look forward to working with Jackie and her administration to take on the dangerous criminals who threaten our community, fight for the vulnerable and for victims of crime, and work to keep children out of crime in the first place."

Jackson, a star trial attorney in the office, is best known for his successful murder prosecution of music producer Phil Spector.

Lacey, 55, has the support of her boss, Dist. Atty. Steve Cooley, who is retiring after three terms.

Lacey touted herself as the only candidate with the experience to run the office of about 1,000 prosecutors. In March 2011, Cooley selected her as chief deputy -- the No. 2 position in the office -- shortly before announcing his own plans to retire.

Though the position is nonpartisan, Lacey is a registered Democrat and picked up a slew of endorsements from prominent Democratic politicians, including California Atty. Gen. Kamala Harris and Los Angeles Mayor Antonio Villaraigosa.

Jackson, 47, pointed to his credentials as a frontline prosecutor, saying he had the on-the-ground experience needed to run a modern district attorney's office.

Both candidates raised more than $1 million, and the campaign was at times bitterly fought.