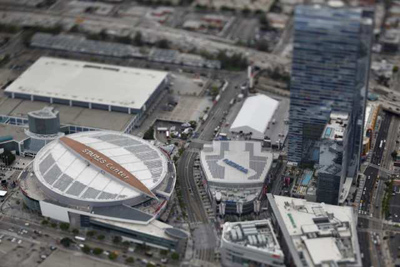 A view from the Goodyear blimp of Staples Center and the Ritz-Carlton Hotel at L.A. Live. (John W. Adkisson / Los Angeles Times)

With the Lakers, Clippers and Kings all in postseason action this weekend and the final stage of the 2012 Amgen Tour of California, authorities are warning of street closures and heavier than normal traffic in the downtown area.

"There's never been a weekend like this in Los Angeles," said AEG's Michael Roth. "Six playoff games in four days? In Los Angeles? Never. And the bike race will be a really big deal."

Officials are expecting normal game traffic Thursday and Friday evening, and Saturday's back-to-back Clippers and Lakers games should not be a problem, Roth said, noting that Staples Center has handled more than a hundred doubleheaders.

The wrench in traffic will be crowds overlapping for the Kings game and bike race on Sunday.

Street closures begin after the Lakers game Saturday night - along Figueroa Avenue from Pico to Olympic boulevards and on Chick Hearn Court/11th Street from Flower Avenue to Georgia Street - when two pedestrian bridges will be built in preparation for Kings fans crossing the Amgen bike route Sunday morning for Game 4 of the NHL Western conference finals.

Kings fans are encouraged to arrive beginning at 9 a.m. Sunday. Pre-game events and refreshments will be available. Parking and a free shuttle will also be provided at the Coliseum, and officials said a bike valet will be available at Staples Center.

Outside Staples, the final day of the eight-day, 750-mile professional bike race is expected to end by noon Sunday after a five-mile downtown circuit.

Street closures along the circuit will begin at 7 a.m., with thousands expected to participate in a free biking event along the course before Amgen riders enter starting at 10:30 a.m.

Traffic will also be complicated by the Dodgers, who will be hosting the St. Louis Cardinals as part of a weekend homestand. A weekend trade show is also scheduled at the Los Angeles Convention Center.

Officials are encouraging people to ditch their cars. Public transportation - including the Red, Purple, Blue and Expo Lines - all stop near Staples Center. Those who can't live without their cars should allow plenty of extra time for the drive.