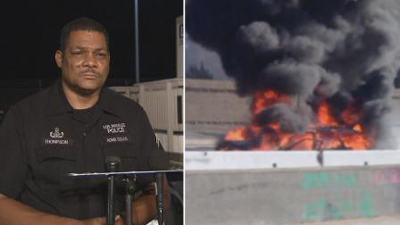 LAPD Bomb Squad Lt. Don Thompson talks to the media after he rescued a driver from a burning car on the 405 Freeway on Wednesday, Dec. 25, 2013. (KABC Photo)

A 72-year-old man who was rescued from his burning car on the 405 Freeway has been arrested on suspicion of DUI, according to the CHP.

The driver's black Mercedes Benz station wagon burst into flames after he veered across the lanes and crashed into the center divider around 1:45 p.m. near the Sepulveda Pass.

LAPD Bomb Squad Lt. Don Thompson happened to be passing by on the opposite side of the freeway when he saw the fiery crash. Thompson stopped his bomb squad vehicle and jumped over the center divider. He unbuckled the unconscious driver's seatbelt and pulled him to safety.

"He was going to die. There's no ifs, ands or buts. Another 10 to 15 seconds, no one was going to be able to get in there and unbuckle that buckle," said Thompson. "Thank goodness I felt that button, hit the button, the belt released and I grabbed him with two hands and started pulling him out."

After Thompson pulled the driver out of the car, some Good Samaritans jumped into action and helped pull Thompson over the K-rail when he became slightly disoriented because of all the smoke.

The driver, who has not been identified, suffered only minor injuries and will be OK. Thompson sustained burns all over his hands. He says thankfully he was wearing his bomb squad uniform, which is fire-retardant and may have helped save his life.