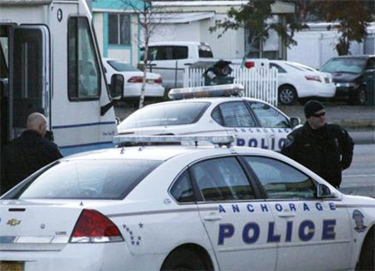 The weak economy's effect on local governments will cause nearly 12,000 police officers to lose their jobs by year's end. (Mark Thiessen, AP)

By year's end, nearly 12,000 police officers will have lost their jobs, and 30,000 positions in county and municipal departments will go unfilled, both direct consequences of a faltering economy that has forced deep cuts in local government budgets.

The sweeping reductions, outlined in a Justice Department review to be delivered today to the nation's police chiefs meeting in Chicago, put law enforcement on pace for its first job decline in 25 years.

"The effects of the economic downturn on law enforcement agencies may be felt for the next five to 10 years, or worse, permanently,'' the report concluded, adding that the days when local governments allocated up to 50% of their budgets for public safety are "no longer a fiscal possibility.''

The report comes as Vice President Biden suggested that rejection of the administration's jobs proposal, which includes $35 million for police and other local government jobs, would lead to more crime, including murder and rape.

"When you drastically cut the number of police in cities, which is happening all across America, crime goes up,'' Biden said Sunday on CNN's State of the Union. "That is a fact ... It's that simple. It's not an ideological point. It's not a political point. It's just a physical reality.

"When the economy tanks, when foreclosures increase exponentially, when homes get abandoned, drug outfits move in, arsons go way up," Biden said. "That causes a spiral. That drives down revenue available for the cities and counties. They lay off more cops. The more cops who are laid off, the more crime that occurs."

Biden's assertions were immediately challenged by some Republican lawmakers who cited FBI statistics that show crime has declined nationally, even as departments have dramatically cut their forces.

"Vice President Biden made a number of comments that I believe were over the top,'' Barrasso said. "To me, the vice president is attempting to use fear tactics on the American people.''

Bernard Melekian, director of the Justice Department's Office of Community Oriented Policing Services, which produced the job-loss report, said that although crime has been declining nationally, some cities, including Camden, N.J., have been struggling after their police forces were reduced.

Nearly half of Camden's police force was laid off in January. Federal grants have allowed some to be rehired, but between January and June, violent crime in the city increased by 13%, according to an analysis by the Courier-Post of Cherry Hill, N.J.

Melekian said the Justice Department's report attempts to show how the recession has changed the landscape of local law enforcement and is "redefining the role of policing'' in the United States.

In many cities, Melekian said, the losses will be permanent and will require agencies to adapt by consolidating services and applying new technologies to meet the demand for services.

"This is not a typical economic cycle,'' Melekian said. "This is fundamentally different.''