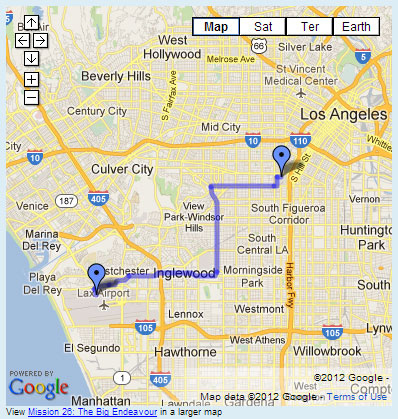 As it turns out, transporting a space shuttle through city streets is a "Big Endeavour."

Space shuttle Endeavour, the youngest of NASA's retired orbiters, will depart later this week on a road trip from LAX to its new exhibition at the California Science Center. The two-day, 12-mile journey follows Endeavour's delivery to L.A. atop a jumbo jet last month.

The move, which will begin hours before dawn on Friday morning (Oct. 12) and end after nightfall the next day has been dubbed "Mission 26: The Big Endeavour." While it was in service to NASA, Endeavour flew 25 missions to space between 1992 and 2011.

Endeavour will make the journey atop a modified NASA overland transporter, driven most of the time by four self-powered, computer-controlled vehicles. For a brief stretch though, the shuttle will be towed by a stock Toyota Tundra pickup truck.

Despite being initially promoted by Los Angeles' mayor as the "mother of all parades," the logistics of transporting a spacecraft with a 78-foot (24 meter) wingspan and a 58-foot-tall (18 meter) tail required the police to shut down streets and sidewalks, limiting public viewing to only a few designated areas along the route. Still, tens of thousands of residents and visitors are expected turn out to witness Endeavour's slow trek to its new home.

Endeavour is scheduled to depart LAX airport property at around 2 a.m. PDT Friday (Oct. 11). The first day of the move will be punctuated by short drives and long stops as crews work to raise power lines between the airport and the overpass that the shuttle will cross over the freeway.

Endeavour will take Westchester Blvd. to Sepulveda, where it will make its first extended stop for about nine hours in a parking lot as the first set of transformer lines are de-energized and raised. That afternoon, Endeavour will continue down Manchester Blvd., crossing into Inglewood and stopping for another six hours as its path is cleared.